Uralten, the First Time, and the Seven Sages.

What is clearly noticeable is the colours - Black Red on White background, Black-White-Red being the ancient colours of Eternal Germania. This has a 'flory' cross in black with four black choughs (**) with red beaks and red feet, and also includes four fleur-de-lys on the ends of the cross, what could originally have symbolised the Irminsul.
(*) This may not be true since it was some centuries after when it was attributed to Edwin.
(**) Choughs are coastal jackdaws. 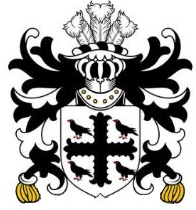 The above coat-of-arms clearly has the Fleur-de-Lys on the top (used in Wales) and has a more equal-armed cross. It seems clear that the Tegeangli have been remembered to this day in this area. In the first image the birds look somewhat like gulls, whilst in the above they look more like the jackdaw family; this is perhaps because they were later taken for gulls because they were the most numerous coastal birds in the area.
A plaque in Mold records a battle fought between the Saxons and Picts against the Britons (Welsh), this being around 430 CE. In 365 CE the Roman historian Ammanius Marcellinus clearly identifies Rome's enemies in Britain at the time -
The text of Marcellinus is not clear as to whether the Saxons were settled here or were sea-raiders since he actually mentions the Franks and Saxons attacking 'by land or by sea'. The Dicalydones or Dicaledones were perhaps the Caledonians, the Verturiones were Picts and the Attacotti were a tribe whose roots are obscure but from one legend we find that they were a Royal Clan descended through the male line from Atlas, the First King of Atlantis. We find also that a common Pictish name was Oengus or Angus which recalls Ingwe/Ingui/Ingus.
These ideas give further weight to the theory that the English Folk dwelt here in these islands in ancient times. What we say will no doubt fall on deaf ears in regard to the Establishment, but our main concern should be to revise English History in order to awaken the English Folk, so what the leaders of the Establishment think or say matters not one jot.
Note (added August 2016) - The area of the Tegeingl was actually known in later times by the English as 'Englefield' which clearly shows that it was occupied by the Engle-Kin or Angle-Kin.
﻿
﻿

Posted by Wulfinga at 11:39 No comments: