Posted by Wulfinga at 08:04 No comments:

Blood & Soil! The title itself should put some of those who have no understanding of this into a form of hysteria. There is nothing at all sinister about the title, and it rightly sums up almost everything that Folkish Wodenism stands for, everything that makes us opposed to those religions that are man-centred and which reject Nature and Natural Law. Folkish Wodenism is not man-centred, neither do we see 'God' as being outside and above Nature; we seek a harmony with Nature and Natural Law, and this can only come about through a New Order. 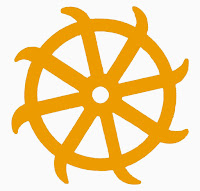