I have covered the Horns of Gallehus before, but here I will just mention a few ideas, some old, some new, which may help to understand the use of the horns and the meanings of the symbolism. 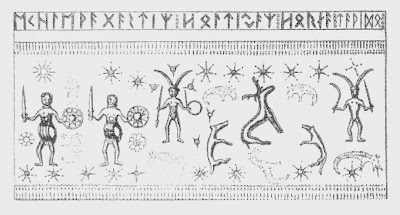 On the Runic Horn we see the figure of a Horned God who in one case holds a Spear and Noose, and in the other holds a Spear and 'Boomerang'. Both figures have the Cweorth-Rune pose and have Goat's Horns. There is a Stag and two Wolves/Dogs, both these being symbols of the Horned One. Two warriors share the same pose but hold a Sword and a Shield. 'Otherworldly' animals share this piece, as well as it being some kind of Star-Lore. The runes are from the Common Germanic Futhark. The Horned God is the 'Lord of Animals' and 'Lord of the Trees' and is the 'God of the Mannerbunde'.

This is from another angle, a bit more in balance; it shows the 'otherworldly' animals and fish more clearly - they are 'dotted' rather than carved. 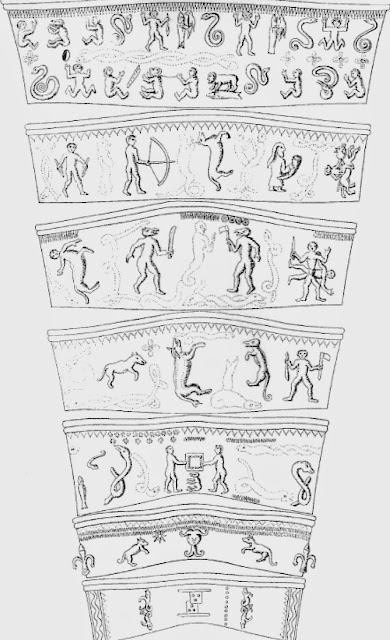 This is the other Runic-Horn ('Runic Posture Horn') which is where we find the direct link to the Cultic Horn and the Germannic Mannerbunde. On the third part we find a Wolf-Warrior holding a club (Woden Warrior) and another Wolf-Warrior holding an axe (Thunor Warrior). There is a 'centaur' which has associations with the Cultic Warrior Bands, and Twin Warriors joined at the hips - the Divine Twins who also have associations with the Cultic Warrior Bands. Above this is a Valkyrie holding a Drinking-Horn, suggesting perhaps Valhalla and the Einheriar.

In the fifth part we have two figures holding a Taefl-Board, underneath which is a dog-headed figure in the Peorth-Rune pose, again associated with the Taefl-Board. On the lowest part we find what appears to be two 'boards' each with a 'dice' - again linked to the Taefl-Board and also the Germanic Mannerbunde.

On the top row we find the figure of a man and a dog-headed figure playing the same Board game; the dog-headed figure is tied by a lead, and all three figures are sitting in the Peorth-Rune posture associated with this game of chance.

The runic-postures shown on this horn tell us that the runes were used as postures and this is not just a modern invention as some have maintained. The 'Jester' figure in the centre of the second row from the bottom is another hint of the Cultic-Warrior God, Woden. One of the figures on the top row, holding the Cweorth-Rune stance, is akin to the Long Man of Wilmington in this same stance.

In Dorset, England, we find a legend of the Saxons there worshipping a 'Stag' and a 'Snake' both associated with an Irminsul. The Stag and the Snake feature prominently on these horns, found in Denmark in the area where once the English Tribes dwelt - though we do not know the original makers of the horns. The postures such as 'ear' and 'cweorth' do not feature in the Common Germanic Futhark and are from the Old English Runes. The horns seem to be Cultic-Horns used in rituals associated with the Cultic Warrior Bands of Germania.

There seems to be a duel role in the symbolism, that of the physical warriors and totem animals, and that of the 'otherworldly' figures and totem animals, and the latter seem to be related to Ancestral Worship. On the Runic Posture Horn we find various 'Coiled Serpents', spiralling around each other, suggesting a link to the Kundalini or even to Earth-Force. This horn certainly represents the link between the Cultic-Warrior Brotherhoods and the Taefl-Board game around which this centred. 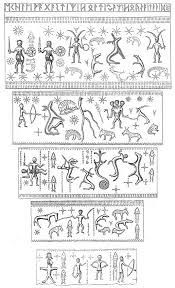 The figures of the Horned God seem to be that of the god Woden, and the three-headed god holding an axe and the lead of a goat suggest Thunor. It would seem that we have here three different forms of god-head associated with the Cultic Warrior Brotherhoods -

There are also associations with the Einheriar, the Ulfhednar and the Berserker, the last one being the bear-skin and helmet on the bottom row of this horn. With the clear association of 'Robin Hood' with the Cultic-Warrior Bands the figures showing a bowman underline this aspect of Woden, one which does not seem to have been so emphasised in the later Viking times. that these ancient Warrior Bands were far more than a group of young, wild heathen barbarians is shown here, where Thunor is seen as the Triple-God-Head (Axe-God which is a very much earlier form) opposing the great enemy of the Gods - the Serpent of Evil.

In the work on Odin and the Germannic Mannerbunde by Kris Kershaw we find almost every aspect of what is symbolised on these Golden Horns, down to the board-game, dice and the 'dog-headed figure' which is mentioned at the end of this work. Nowhere in the work can I see any mention of the Horns of Gallehus, so these seem to vindicate this important piece on the subject.

Posted by Wulfinga at 13:29 No comments: