Northumbria and the Runes


We know that the 33 rune-row derives from a Frisian and Northumbrian origin, and it has been seen in the past as an 'extended' rune-row based upon the Elder Futhark or Common Germanic Futhark. The Frisians derive their name from Frya/Freya, although the name 'Frisian' could also relate to Ingui-Frey. But where does the name 'Northumbrian' and 'Northumbria' come from?

Obviously the name stems from ‘North-Umbrians’, but who were the ‘Umbrians’. Here we have to go to Italy where we find tribal groupings called the ‘Umbrians’, but looking at this brought new light on our historical past. Here in England we have ‘C-umbria’, ‘Humber’, ‘Northumbria’ etc. and some scholars seem to think that ‘Cumbria’ was where the ‘Cymru’ (Welsh) dwelt, although there are no Welsh names there as far as I can see. Some see the ‘Umbrians’ as the Cymru, but without any evidence whatever.

The key to the ‘Umbrians’ may lie in their being part of the ten divisions of the Inguvines, a name so similar to Tacitus’ Ingvaeones (a name which should be Ingwines meaning ‘Friends of Ing’) that this cannot be a coincidence. It is thus possible, and this is again conjecture, that the ‘Northumbrians’ occupied this area before the ‘Anglo-Saxon invasions’. If so, then how far back does this go, and did they use this rune-row in more ancient times? It is thus possible that this extended row was not taken from the Elder Futhark but was used here in England well back into ancient times. Remember, the Germanic Tribes in pre-Christian times wrote nothing down and passed their knowledge through word of mouth. If runes at that time were written upon wood, and that alone, then they would not have survived the ages.

It does not appear that the Cimbri were the same as the Cymru, and ‘Cumberland’ would thus have more likely been the ‘Land of the Cimbri’ rather than ‘Cymru’, the former being allied with the Teutons, an obvious Germanic Tribe. The Cimbri also came down from the area of Southern Scandinavia where the English Tribes dwelt. It is thus possible that a remnant stayed in the area and came here with the Anglo-Saxons, giving their name to ‘Cumberland’ which later became ‘Cumbria’. 'Cumber' suggests that there could have been an alternative 'Humber' which we shall look at in due time.

There is also yet another tribe sometimes described as ‘Celtic’ and other times as ‘Germanic’ – the Ambrones. Here we cannot but see the resemblance between ‘Umbrians’ and ‘Ambrones’, so these may have been of the same origins. The Ambrones seem to have been kin to the Ligurians. The Ambrones allied with the Cimbri and Teutons to attack Italy. There they fought against the Ligurians who recognised them as kindred.

Here it is interesting to trace the Ambrones, since they originated in the area of Jutland, around the islands of Fehmann (old name Imbria) and Amrun, and were most likely the ‘Ymbers’ of Widsith. The stumbling-block, as I have stated, lies in academics, and here we see a typical example, for they assume that one of the kings Boiorix (‘King of the Boii’) has a ‘Celtic’ name, and thus can be lumped into the ‘Celtic’ mould of nations such as the Welsh, Scots and Irish. The suffix –rix is from Gaul, and I have shown how not all tribes from this area are ‘Celts’, some were Germanic. The term –rix is obviously the same as rik or rig which are Germanic titles meaning ‘ruler’. The Celts and Germans were the same people, some developed languages from Southern Europe as they moved southwards.

As I have said, since the Ymbers were here in England, possibly with the Anglo-Saxon ‘invasions’ or just as possibly earlier, as part of the Anglo-Germanic peoples already here. Whatever the case, that these peoples held on to this particular runic system is important, especially since it contains more Tree-Runes (a feature of the ‘Druids’), the Four Hallows, and the Graal Runes. The Old English title ‘Ymbers’ would seem to bring together the names ‘Umbrians’ and ‘Ambrones’.

We have the River Humber, of course, but also ‘Humberstone’ in Leicester, which I have featured on the Inglinga Blog. If this is connected to the Ymbers then this tribe lived further afield than Northumbria. As the Umbrians are Inguvines then they are part of the great Germanic Tribal Federation of the Friends of Ingui that later made up the English Folk-Nation.

When these Germanic Tribes moved southwards they picked up the traits of the peoples of Southern Europe, and committed their works to writing, a thing unknown in the harsh Northlands. Thus, the Umbrians set down the Inguvine Tablets, seven bronze tablets outlining the liturgy of a brotherhood of priests known as the Fratres Atriedii.

There are also two other things that seem to confirm that the Umbrians/Ambrones  were of the Ingvaeones. They seem to be related to a people who spoke an Oscan Language, to the tribe who were sister to  Umbrian and Volscian, and who occupied the area of Campanica and Latium in Italy. One of the spellings of their name was Osci which is clearly similar to Oski (a name of Odin) and to the Oiscingas from whom Hengest and Horsa descend. In Widsith, the Old English poem, we find ‘Sceafthere (ruled) the Ymber, Sceafa the Langobards’ whence Sceafthere would be Sceaf, the Divine Ancestor of the English Folk.  This clearly indicates that the Umbrians/Ambrones claimed descent from  Sceaf-Ingui, just as did the Langobards.

According to Plutarch the Ligurians called themselves Ambrones; the Ligurians were also called Ligures, Ligus or Ligur. One of the tribes of the Ligurians was called by the name Ingauni. Now, it would seem obvious that the Ambrones were a confederation of tribes, like an early nation made up of different tribes, though these would have been of the same kin-stock. 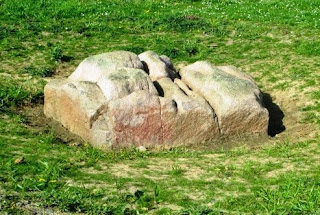 This is the Humber Stone found in the village of Humberstone in Leicester, which is no doubt now very much a part of the City of Leicester. The name 'Humber' reduced to 'Umber' is that of the 'Ymber' mentioned in Widsith. Whether a section of this tribe lived in the area of Leicester we cannot tell; however we cannot rule out the name 'Leicester' being derived from 'Ligur-cester' since this would not be the first place-name to be distorted with time.

The connection between the 33 rune-row and Northumbria may thus be a very important one, since this seems to be directly associated with Ingui/Ingwe and with the English Folk, as well as a possible link to At-al-land in the far distant past. Jutland and Frisia are the main areas where these tribes originated, and we find the 24-rune Futhark together with the rune-stances of the Ear-Cweorth Rune on the Horns of Gallehus from the same area.