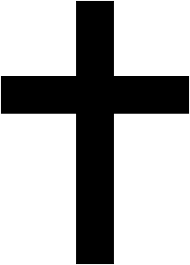 The Old English poem of the Dream of the Rood, fragments of which are found at Ruthwell Cross in Scotland appears at first to be a kind of mystical text where Jesus Christ hangs from a tree and thus some scholars have seen this as some form of surviving heathen text (including myself in the past). After more study of this I now see that this may not be the right interpretation, and that indeed this text is a very clever method of introducing the Cross-Archetype to the Heathen English as symbolic of the new Christian Faith. Let us look again at the text.

"Wondrous was the Cross of Victory, and I, stained with sins, stricken with foulness; I saw the glorious tree......"

The phrases 'stained with sin' and 'stricken with foulness' are clearly part of the new Christian Faith, aimed at self-hate and thus self-destruction. This is no Heathen text! The text moves from the image of the 'tree' to the 'cross' many, many times, thus linking the two images as one single image. This is a very clever trick or slight of hand, since to the Heathen the tree is Yggdrasil on which Woden hung in an act of self-sacrifice to gain the Ancient Knowledge of the Runes, and to the Christian the Cross is where the 'Son of God' hung to redeem mankind.

Christ here is seen as a 'Warrior-Hero', something which would clearly have been used because of the Heathen Ethos of honour, courage and bravery. The phrase 'All creation wept' reminds us of the death of Baeldaeg, another Heathen Archetype, where he is pierced by a dart or arrows. It is said that the tree began to talk, and here there seems a rather clever ploy to make the tree look as if it is 'alive', some 'living archetype'. But, it is not the tree that is 'coming to life', it is the 'Cross of Christ'.

The Tree-Cross is 'streaming with blood' now, whereas before 'I was bedewed with blood, shed from the Man's side'. Here we see a subtle change once more, where the Tree-Cross is now itself alive, and a living thing, an Archetypal Image. The aim of the whole text seems to give a clear indication of how the Christian Church introduced the Heathen Image of the Cross into their own new religion as an Archetypal Image usurped from the image of Woden upon the World Tree -

"Now the time has come when far and wide over the earth and all this splendid creation, men do me honour; they worship this sign..."

To affect this change they used our own Ancient Runes as the written language to place this upon a 'Heathen Cross' which was in effect a clever and subtle Judaeo-Christian text designed to further their alien Middle-Eastern Religion here in England.

"Then glad at heart I worshipped the cross with great zeal...I can seek the triumphant cross alone more often than all men, do it full honour...and to the cross I turn for help..."

At the end of this text it is the cross which has become the focus of worship, as an image linked to the figure of Jesus Christ. We can see in all religions and movements how much more powerful a symbol is than that of a human figure who leads that movement. The symbol, the image, represents that figure, and here we can see how the Judaeo-Christians managed to introduce the image of the 'Cross', replacing that of the World Tree, and replace the figure of Woden with that of 'Jesus Christ'. And here it matters not on jot whether any such figure ever existed, since the symbol of the 'Cross' was what mattered, as an Archetypal Symbol through which they could conquer Northern Europe.

We cannot say that the figure which is featured here is Woden, the text is clearly a Christian one; yes, there are subtle links to Woden, including the use of the term 'Rood' - the Gallows Tree. But the whole thing revolves around the promotion of the 'Cross' as a symbol of worship, behind which is the image of their own 'Jesus Christ'. The use of the living tree is there because it was necessary to replace this symbol with that of the 'Cross of Christ', the new symbol for the Judaeo-Christian Church in Northern Europe. The poem gradually shifts from the image of The Tree to that of The Cross, through the subtle emphasis of these being one and the same. But at the end The Cross is now clearly the centre of worship as a symbol of the new religion that has come to destroy the True Religion.

Note - Yes, this contradicts some of the things I have said before, but I see no reason to change my mind when new ideas appear, and admit being wrong the first time.

Posted by Wulfinga at 07:12 No comments: