The Eagle & The Serpent. 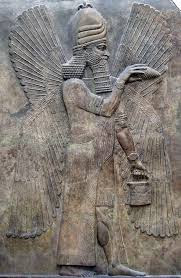 According to establishment academics the cradle of civilisation started in the area  known as Mesopotamia; the earliest civilisation was at Sumer which is where we find the Anunnaki Gods. Unfortunately these gods have been the subject of various dubious interpretations as to their origins as 'aliens' or 'reptilian aliens'. These interpretations stem from the idea that the Anunnaki came down from heaven to earth; a literal translation of the texts renders this as a physical act, but since the gods are high spiritual beings it would be wiser to see this as their appearance on earth in a physical form, an 'incarnation' rather than literally appearing in space-ships. But, having said that there is room for another interpretation and that could be that of an appearance from the skies in some sort of craft (like the Tuatha de Danaan) but not necessarily from another planet. We should perhaps leave our minds open to this rather than dismissing anything outright.

With the find of the more ancient Gobekli Tepe civilisation is now thrown back even further; but again we should beware of coming to the conclusion (as most seem to do now) that this is now the earliest civilisation, since every time this is done another find throws the datings back even further. Anyway, the dating of Gobekli Tepe takes us back to around 12,000 years ago, a date that fits so well with the Legend of Atlantis. The earlier Armenian name of Gobekli Tepe is Asarport. 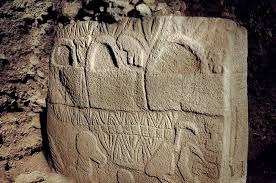 The one thing that links the Apkallu and Gobekli Tepe is the symbol of a kind of 'water-carrier' as seen in both of the above images. I have mentioned this before on a couple of occasions because it does seem to be important, though no-one seems to know what it means. Another thing that appears to link these two areas and symbols is that the Apkallu or 'Seven Sages' appear before a Great Flood and are responsible for giving culture and civilisation to the peoples of the Earth. They appear as the Saptarishis ('Seven Sages') of the Vedas of India. In the Sumerian Erra Epic Marduk refers to the 'Seven Sages of the Abzu' who, like their lord Enki, 'have been endowed with sublime wisdom'. The Abzu (Sumer) or Apsu (Akkad) is the Primeval Sea which is between the Earth and the Underworld. We have thus two distinct links to water here - the Flood and the Abzu.

The Seven Sons of Mimir dwell in the Realm of Mimir which is in the Underworld, and these awaken and arise before Ragnarok, which is, like the Great Flood, a world-wide catastrophe. The realm of 'memory' is the hidden subconscious mind, which is akin to the 'Underworld' of mythology; this is associated with water and usually to the Moon. The Saga of Hjuki and Bil was kept for us as a children's tale - Jack and Jill - and this tale is told of them going up the hill to fetch a 'pail of water' but the original clearly relates to the Moon. The 'pail of water' reminds me of the 'pail' carried by the Apkallu. 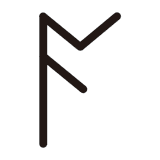 The stance held by one of the Apkallu is that of the Ac-Rune in which a Pine-Cone is held in the right hand and a Pail of Water in the other hand. This rune represents an Oak Tree, but it also represents the Acorn, which is a symbol much like the Pine-Cone. Since the loss of the powers of the 'Third Eye' was supposed to have happened with the sinking of Atlantis, then this symbolic figure may relate back to a time as far back as 12,000 years ago. I have shown before how certain runes seem to have developed from human stances - Peorth, Ac, Os, Ear and Cweorth.

In the above image the figure has a fish-headdress and thus associated with the waters - maybe here we can see the Waters of Dissolution at the end of a world-age or cosmic cycle. But in some images this is an eagle-headed figure with the same stance and symbols. 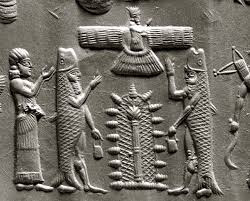 This is a clear image of two Apkallu, both with fish-headdresses, and both holding a pail in their left hand. In the centre appears to be a symbolic World Tree or World Pillar (could be a World Mountain too), and above this is the figure of a god in the Os-Rune stance and making the symbol of a Winged Globe. This figure later appears in areas such as Akkad and then in Persia as Ahura Mazda - the God of Light. 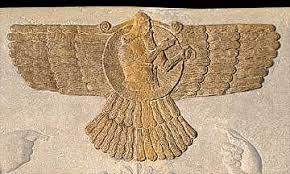 The Assyrian god Ashur is shown as a winged deity in the Os-Rune Stance, and this is also the Winged Globe. The same figure later appears in Persia as Ahura Mazda - 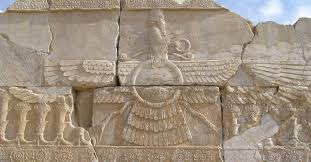 Both figures hold the Ring of Power and some symbols are shown holding the Ring and the Rod. The symbol of the Winged Globe is very ancient indeed, and seems to be symbolic of the High God. We can obviously associate this symbol with Woden as the High God because his rune is the Os-Rune. 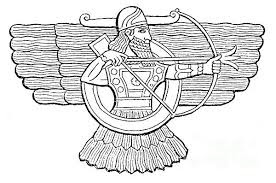 The above image of Ashur is seen holding a Bow and Arrow, and again we have a symbol that equates with Woden as 'Robin Hood'. The Eagle is often found as symbolic of the High God, as we find with the Greek god Zeus, and Woden is also associated with the Eagle. 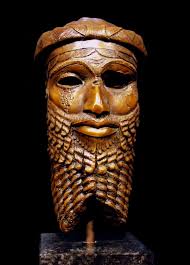 The symbolism of the Winged Globe appeared once more in the Twentieth Century which is exactly where we would have expected it to appear, considering the prophecy by the Babylonian Priestess and Seeress, Sajaha, who prophesied that Babylon would arise again in the 'Land of the Midnight Mountain' i.e. in the North. Considering that Baphomet is said to represent the Male-Female godhead Ilu whose symbol is also the Bab-Komet (Black Sun) then there could be a link between the Winged Globe and the Hale-Bopp Comet which also heralded a new era. 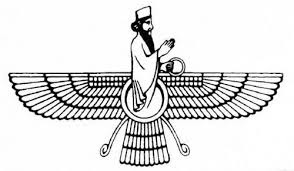 We are approaching the start of the Age of Aquarius which is the 'Age of the Water Jug'. We are witness to the 'Waters of Chaos', the 'Waters of Dissolution' which swirl all around us like a Sea of Madness. 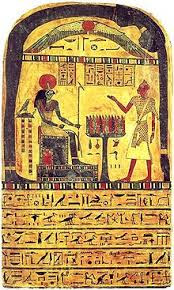 On the Stele of Revealing we find the Winged Globe at the top, which seems here to have links to the Egyptian God named Horus. The Hawk-Headed god (Horus) is shown here on the left with the Solar-Disc on his head; on the right is the Egyptian Priest Ankh-af-na-Khonsu. The Winged Globe is thus an important symbol in Egypt.

The IE Root *an- means 'to pour' or 'to draw water' and the name of the High God of Sumer was Anu from which the term Anunnaki stems. We have yet another link to the idea of 'water' and 'to pour', which is also seen in the Gyfu-Rune and the ideas around Ginnungagap that I have shown before. All of this relates to the coming New Age, the Age of the Water-Jug or Water-Pourer. This does, to me, suggest that the harsh and evil times that we are living through today will be ended by the Will of the All-Father who will again interfere in human affairs to bring these evil times to an end.

The Winged Globe could well represent an Eagle at one level, the symbol of the High God. We find this as the symbol at the top of the World Tree (Yggdrasil) as symbolic of the heavens. Between the eyes is a Hawk, representing the 'Hawk's Eye' (Third Eye), and at the base is the Serpent which is in the Underworld. We shall now turn to the Serpent symbolism.

I am going to repeat what I have said about the meaning of the Garden of Eden, the Serpent, and Adam and Eve. Firstly, the 'Garden of Eden' is more likely to have had its origins in the ED.IN of Sumer - the Home of the Gods. In this grows the Tree of Knowledge and the Tree of Life, the latter conferring immortality, and thus linked to the Golden Apples of Idunn.

The Serpent tells Eve that should they eat of the Tree of Knowledge of Good and Evil 'your eyes shall be opened, and ye shall be as gods, knowing good and evil. The key part here is 'ye shall be as gods', a statement that clearly has no place whatever in the belief-system of a mono-god, a single deity above all. When Yahweh (Shaddai) discovers that they have eaten from the Tree of Knowledge he curses the Serpent - 'upon thy belly shalt thou go' - and tells her he will put enmity between the Woman and the Serpent. Then the Demiurge drove the man out of the Garden of Eden, lest he eat of the Tree of Life and attain immortality, as the gods.

In Matthew 10:16 we find Jesus telling his disciples - 'be ye therefore wise as serpents' - which seems to completely contradict the idea that the Serpent was seen as symbolic of evil, or at least it tells us that the Serpent was associated with wisdom, which it was in many traditions. We should recall that our own god Ingwe is associated with the Serpent, and especially the Fire-Serpent. We should also recall the link between the Aryan Krist and Ingwe; thus the reason we find that the Krist tells us that 'he that overcometh' shall eat of the Tree of Life, and thus will attain immortality.

But there is another section of the New Testament that goes further with this theme, and this in in Revelation 22:2 which mentions the Tree of Life which bears 'twelve manner of fruits' and whose 'leaves of the tree were for the healing of the nations'. Idunn has twelve apples and here we have 'twelve manner of fruits', and the tree has healing powers  for the 'healing of the nations' (Gentiles).

"God in Heaven. The Kha Khan, the Power of God, on Earth. The seal of the Emperor of Mankind."

The Seal of Genghis Khan.

In this statement we see the Wyrd of Genghis Khan who bore the Power of God here on Earth. This is how we should perhaps see the descent of the power of the Annunaki to Earth, as being the descent of God to Earth, and thus founding a high civilisation ('Kingdom of Light') in a certain area of the Earth - Sumer in this case. This 'god-force' can incarnate as a single being such as Genghis Khan, who wore the Swastika Ring which was his symbol. The term 'Khan' can be related to the Kan-Rune, a rune of kingship, kinship, but also the Rune of the Serpent or Dragon. He was the Kha Khan - the Khan of Khans - and here we can see a direct link with the New Testament idea of the Warrior Krist who is specifically stated to be the King of Kings, and Lord of Lords which is the same title as 'Kha Khan'. This is the King of the World which is related to Shambhalla. The name is written on his thigh which in esoteric terms has always meant the groin area. The root of the name Ingwe can mean 'Serpent', 'Fire' and 'Groin'.

"Immortality is neither democratic nor collective. Only those of divine origins can reach it consciously. In an aristocratic combat, in a very hard war in which very few prove victorious."

Posted by Wulfinga at 10:38 No comments: