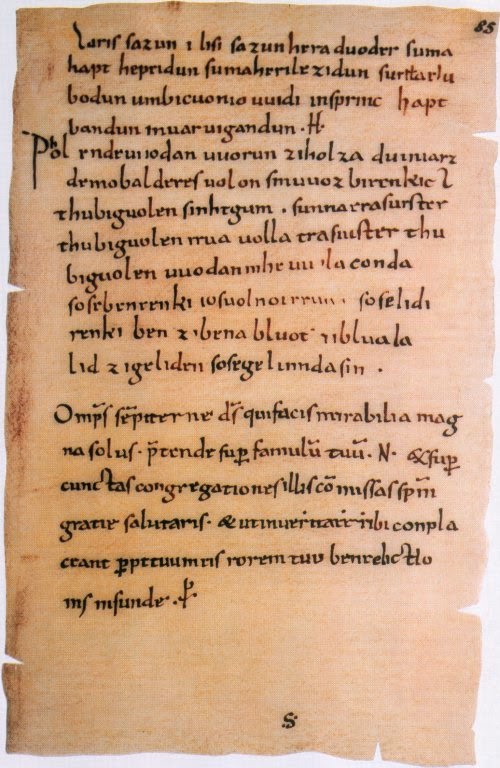 Phol and Wodan rode into the woods,

There Balder's foal sprained its foot.

It was charmed by Sinthgunt, her sister Sunna;

It was charmed by Frigga, her sister Volla;

It was charmed by Wodan, as well he knew how;

Bone to bone, blood to blood,

This is taken from the Old Saxon version and I have retained the name Wodan rather than Woden. This charm is also known in the Orkney Islands in a Xtian version -

Sinew to sinew, vein to vein,

Joint to joint, and bane to bane,

Mend thou in God's name.

This is called the Wristing or Wresting Thread because to be effective a thread with Nine Knots on it is used at regular distances, and the charm is repeated at every knot. Another version can be found in the Shetland Islands -

And the foal slade;

And sinew to sinew.

Heal in the Holy Ghost's Name!

Since these charms can only be found in the Germanic areas and do not seem to have been known by the Norse, it would seem strange that they have become known in this remote area of Scotland, although there are very old records of the Saxons invading the Orkneys, but this is around 300 CE. Before moving on we shall put this into its Old English version -

At first glance this is a simple healing charm, but when we look at it more carefully we find that this simple piece may well be a part of Aryan Mythology that has been almost lost. In fact it may be connected to the Myth of Balder, and to the events that ended the Golden Age of Peace and Plenty. But first we need to look at the god-names used in this charm -

Phol - This is also Pol, Fal, Fol which are titles of Balder; it is Pol's foal that sprains his foot. We can find the name 'Pol' in various parts of England, as listed by Kemble -

To this list of Kemble's I am going to add Polegate which is in East Sussex just a couple of miles from the Long Man of Wilmington. The name is said to mean 'Gate to the Pool' but may be in doubt since many Old English names are mere 'guesses' I am afraid. However, since a 'pool' can be from a 'spring' then there may indeed be a subtle link - we shall see that in Germany Pol is linked to fountains and springs.

Also the name Westphalia comes from Westfalia and is named after Fal or Pol. We can also find similar charms as this Germanic Charm in Poland (Pol-land), in Belarus and in the Ukrainian Polesye (Pol-esye) which is between the Ukraine and Belarus.

We have Sinthgunt and Sunna, the latter being the Sun-Dis, the former most likely Nanna, the wife of Balder. Then comes Frigga and Fulla, wife of Wodan and her sister. Now, here we have an array of the High-Goddesses and yet they are unable to charm the foal's foot to right. This can only suggest to us that some form of Dark Sorcery was involved in this, and that the breaking of the foal's foot was a deliberate and malicious act. We may suggest Loki as the culprit, and I am here going to tell a tale which became the subject of an article in an Odinist magazine many years ago, which suggested to me another meaning of the Second Merseburg Charm. I have said all this before but it is well worth putting in again, since this may have a deeper meaning than I first thought of.

This, of course, all occurs in ar var alda - the Dawn-Time. We shall now see how this myth fits the latter part of the Golden Age, perhaps just prior to the slaying of the Sun-God at the hands of Loki. This simple legend can also give us the symbolism connected to the Sun-God Balder - the Lord of the Golden Age. We should note the involvement of Loki the Trickster in this again.

The symbol of Balder is the Sun-Wheel, which is a Circle ringed round an equal-armed Cross; this symbolises Balder as the Sun-God of the Golden Age. This is the Golden Ring mentioned in the tale. This Golden Ring is stolen by Loki, which leaves us the equal-armed Cross. The 'Foal's Feet' (the feet of the Cross) are 'twisted' and what emerges is the Fylfot-Swastika. This is symbolic of Baldaeg in the Underworld (as he is now, until his emergence after Ragnarok and the Doom of the Gods). Woden charms the 'twisted' legs of the Foal, which then becomes an equal-armed Cross again. Baldaeg is freed from the Underworld and flies high into the sky again, regaining the Golden Ring - we are back to the Sun-Wheel. We have thus a clear symbolism attached to Pol-Baldaeg -

The name Fylfot is thus a corruption of Fol's Foot or Foal's Foot and this would be the widdershins (anti-sun-wise) version which moves against the flow of Time. This is the Hidden Symbol that was activated from another 'world' in order to create a change in the order of things, and to create a New Order. Baldaeg is the Lord of the Golden Age and it may be that his symbol is also the Black Sun which shines from the Lower World and which activates the Sacred Blood in our Folk. 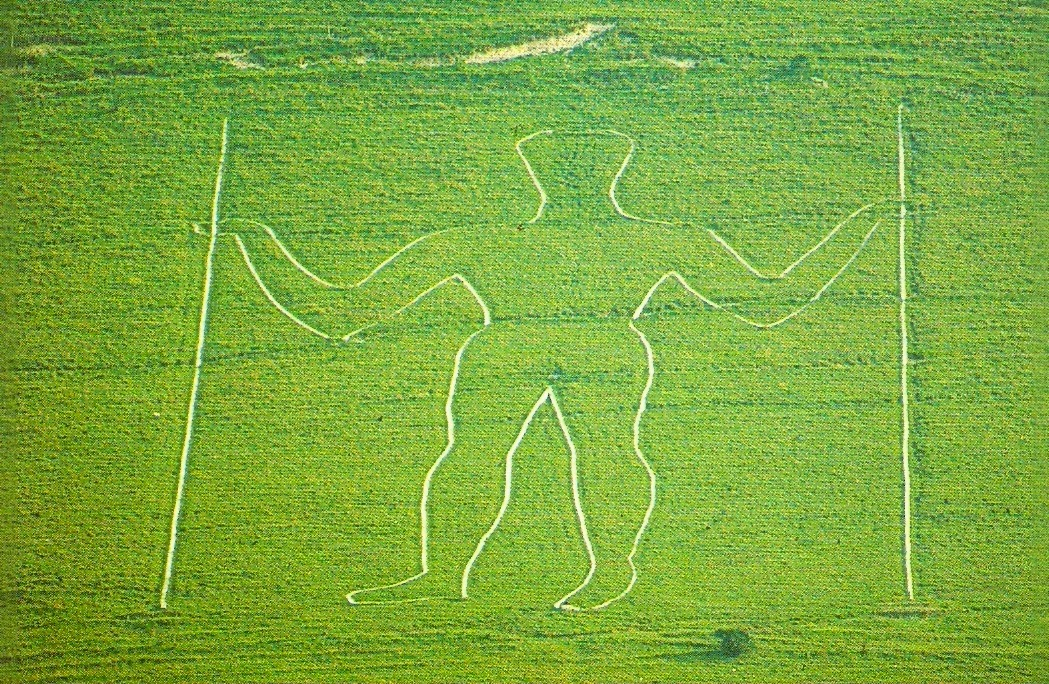 On the night of August 10th 1999, prior to the Solar Eclipse of August 11th, eight Millenium Ale bottles showing an Old Man with a blond-haired, blue-eyed child were buried in the shape of a Fylfot-Swastika in a secret location near to the Long Man - and have been there ever since. Each bottle contained a runic formula and invocation, and these were 'powered' on the morning of August 11th at 11,00 am when the 'sun turned black'. The next day the 'hot stars' (Perseid Meteor Shower) 'fell from the skies'. This was the dawn of a new era, and the conception of the Age of Ing. The Sign of Ing appeared in the heavens at the same time (the planetary positions showed the Ing-Rune or Solar-Cross, the latter may indicate that at this time the 'Foal's Feet' were righted). 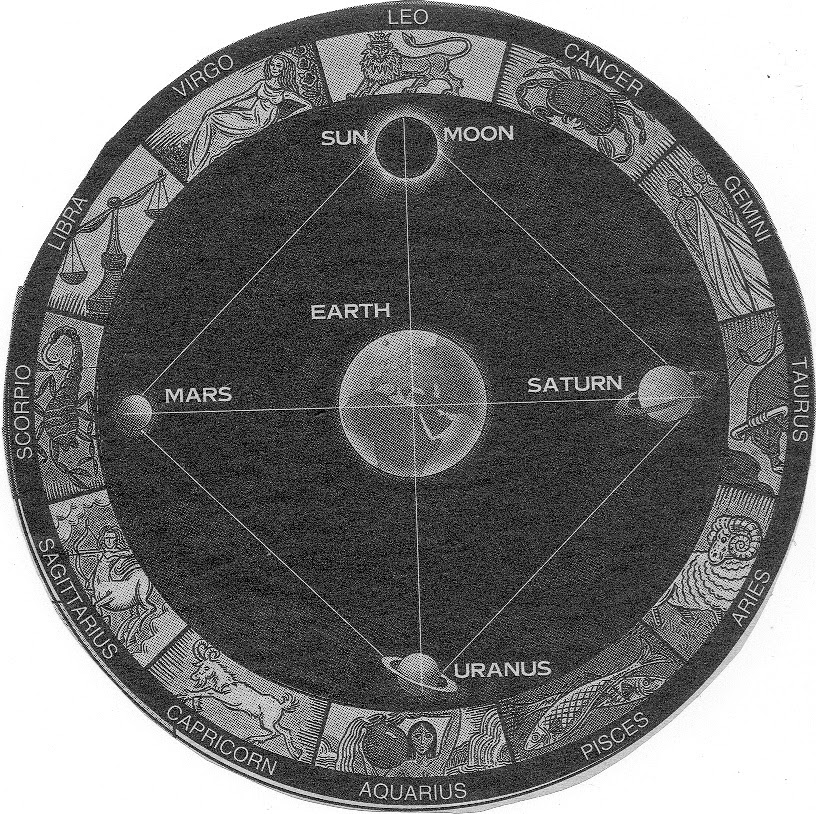 The Sun & Moon (and Venus-Freya not shown) were in the House of the White Dragon (Leo), with Mars (The War-God) in Scorpio, Saturn (The Malevolent One * - at this time) in Taurus, and Uranus (God of the New Age) in Aquarius (The New Age). This formed a Solar-Cross and/or an Ing-Rune which is the Sign of the Son of Man(-nus) this being Ingwe or Ing. The Solar Eclipse is symbolic of Baldaeg in the Underworld (Odainsacre) where he is 'imprisoned'. This is the Black Sun in a sense. The symbolism (as Nostradamus stated) shows that evil and war would reign (Saturn and Mars), and we can see from this that the Sons of Saturn (Loki) were responsible for the 'War of Terror' that we are seeing today. The fall of the Twin Towers heralded the end of the world-age and the world-order that existed.

The Resurrection of Baldaeg will herald the coming of a new Golden Age, and after the Fires of Surt have cleansed the worlds a new and prestine world will emerge from the seas that put out the flames - this is not a new 'creation' since we know that Baldaeg and Lif & Lifthrasir were taken into Odainsacre, together with all that was good and pure, all that was non-warlike. This new world will arise whole from the seas, seeded with all forms of life that existed in the last Golden Age. This we know from the knowledge of Odainsacre, the legend from Iran that has Yima save the 'seeds of life' in a special container, and 'Noah's Ark' which saves the seeds of life from the last Great Flood that destroyed the Golden Age. All these contain seeds of truth relating to the sinking of Atlantis which is a myth remembering the ending of the Golden Age. But there is also an occult legend of the rising of Atlantis and this refers to the arising of this new world and a New Order.

(*) Saturn has been transformed into 'Satan' and chained by the Rings of Ice which we can equate to the Ring of Power forged by Sauron in the Lord of the Rings. This Ring of Power can only be destroyed by Fire - the names of some of the moons of Saturn should be carefully noted, since most planets and stars are called after Greek or Roman Gods -

Saturday (Saturn's Day) is 'Loki's Day' and the 'Sabbath', named from a name for Saturn - Shabbathai. The symbol of Saturn is a 'cube' from which we get the Xtian Cross (a cube opened up). The hexagon (Star of Satan) appears at the north pole of Saturn, and the eye (Eye of Sauron) appears at the south pole. The Rings of Saturn bind the ancient God of the Golden Age and only Surt's Fire will free him when the Ice is melted. As we can see, the original God of the Golden Age was Kronos, and if we see him as the 'God of Time' then we can see that Mundilfori (God of Cyclic Time) is a name of one of the moons. Saturn is the sixth planet from the Sun, and with the hexagon this suggests that the number 6 is connected to this planet. We need to note that Miguel Serrano suggests that rather than living in the Iron Age we are now living in the Lead Age, and the metal of Saturn is - Lead. Lead is the metal that is transformed into Gold by the skilled alchemists.

It is said that the Age of Pisces started with a conjunction of Saturn and Jupiter in the House of Pisces, and that Saturn was the planet of Israel and Jupiter the planet of rulership. This obviously heralded the 'Days of the Messiah' (a name that can mean 'Serpent'). In the Norwegian Rune-Poem we find that the Thurs-Rune is associated with Saturn. The names of the moons of Saturn are that of the Thurs-Clans or the Jotun-Clans. The Thurs-Rune or Thorn-Rune can be a very malevolent rune, though it is also associated with Thunor-Thor and the Hammer of Thor. The rune itself shows the Ur-Hammer or Ur-Axe which was made of stone and not iron as in later times.