'The Wise Ones' & the Founding of the English Nation

According to the Anglo-Saxon Chronicles there was a tribe known as the Gewisse who occupied an area which later became known as 'Wessex', named after the West Saxons. Indeed, what is less well known is that the name 'West Saxons was not used until the reign of Caedwalla (*) when the term 'King of the Saxons' was used rather than the previous 'King of the Gewisse'. Various attempts have been made to make the Gewisse fit a Romano-British form but the obvious still stands out clearly. Now, the Gewisse have been seen as related to another tribe known as the Hwicce.

The Gewisse - the name has been related to the German gewiss meaning 'certain' or 'sure' and their eponymous ancestor (which always tells us something about a tribe) was Giwis. The tribe were obviously a Royal Line of the Saxons, and they occupied an area around Dorchester on the Thames, though no doubt their influence went far further than this area. They captured Searobyrig in 522CE and Beranbyrig in 566CE. The conquests of the House of Gewisse in the seventh and eighth centuries CE led to the establishment of the Kingdom of Wessex, which led eventually to the creation of the English Nation.

The Hwicce - this tribe occupied a tribal kingdom in Anglo-Saxon England, established in 577 with the Battle of Deorham. The kingdom they occupied covered parts of Worcestershire, Gloucestershire, Warwickshire, Herefordshire, Staffordshire and northern Wiltshire. Their first probable kings were Eanhere and Eanfrith.

Right, we have the history of these two tribes or Royal Lines of the Saxons so now we need to discover the secrets hidden within the tribal names and the names of the tribal leaders or founders of the tribes. The German word 'gewiss' is said to mean 'certain' or 'sure'; now Wotan's Krieger is familiar with the German Tongue so he might correct me here if I am wrong. The prefix ge- is used in the Germanic Tongue and as we find in Old English is sometimes dropped leaving just the suffix. Thus Ge-wisse becomes wisse. The obvious stands out here, for the meaning of 'sure' or 'certain' may refer to someone who is 'sure' or 'certain', i.e. a wise man. The meaning of the word Gewisse means 'The Wise Ones'. Their eponymous ancestor Giwis ('Wis') is thus the 'Wise One'.

Now to the Hwicce. Again the name of the tribe seems to allude the historians and scholars, and yet it seems to stare us in the face. 'Hwicce' would seem to be the same as 'Wicce' which is an alternative word meaning 'wise'. Thus the Hwicce are the 'Wise Ones'. The first probable kings are named Eanhere and Eanfrith, names which should straightway link us to the Divine Twins or Founding Twins. We have here, like Hengest and Horsa, Cerdic and Cynric, etc. a set of twin-kings as founders of a particular tribe. In this case - 'The Wise Ones'. The title has also been used of the Visigoths or 'Wise Goths'.

The prefix Ean- also seems to allude scholars since it appears to relate to the Old English eane meaning 'lamb' and eanian meaning 'to give birth' (giving us the modern term 'yean'). These seem to stem from a Proto-Germanic *aunona meaning 'to lamb' or 'to yean'. These meanings have given rise to the word meaning 'fertility' which puts us straight off the mark. What we need to do here is to understand the background to the names, the times when this came about.

Eanhere would mean 'Lamb-Raiders' and Eanfrith would mean 'Lamb-Peace' (**) neither of which make any sense at all. So the names must here be used as metaphors for some hidden truth. These twin-kings had been converted to Christianity, though they do not appear as being converted by Roman Christians. As such the term 'Lamb' would be used for 'Krist' (***). This fits with the meaning of the term, but 'to give birth' brings up the idea of these being Founding Kings.

Putting this together we have two Saxon Royal Lines, the Gewisse and the Hwicce, who are the 'Wise Ones' who pave the way, and indeed are responsible for the eventual founding of the English Nation and the Land of England. We must not forget that it is through the West Saxon Line (and thus the 'Wise Ones') that we get the Legend of Scef-Ing who is the Ancestor of the English Folk. Looked at in this alternative way we can see that the creation of the English Nation unfolded around the Royal Line of the Wise-Ones. The eventual formation was really down to nothing less than the invasion of the Danish Vikings and the Norsemen who were also the 'Friends of Ing' (Ingwaeones). It was the merging of the Viking Raiders and the English Tribes that formed the English Folk-Nation, guided and lead by the 'Wise Ones' who were no doubt Woden Initiates akin to the Armanen of Guido von List. (****)

Another point of interest, and one which seems to confirm what I am saying, is that the Gewisse captured Beranbyrig in 556CE, Beranbyrig being the Old English name for Banbury. I have shown how the word beran (*****) means 'to bear' or 'to give birth' and that it is a word used of the Sacred Centre. Byrig is an alternative to burg or borough. It is at Beranbyrig that the Red and White Dragons fought for supremacy of the Islands of the Mighty, and this is thus the Sacred Centre of these islands. This Sacred Centre is associated with Ingwe and its capture must have been of some importance to the Wise Ones. Of course, the symbol of the West Saxons (and thus the Gewisse) was the Golden Dragon and an early symbol used by the Mercians (Hwicce) was the White Dragon (on a black background).

It would seem that Hengest wielded the Battle-Flame, the Sword of AEtla the Hun, whose Wyrd decreed that he wage a Holy War against the growing power of the 'Religion of Evil' and the Joten who created it. This sword passed to Cynric of the West Saxons who continued the Wyrd through to the eventual creation of the Folk-Nation of the English, guided by the 'Wise Ones' of the Saxon Nation. We should recall, in view of the mention of the Armanen, that the Saxons worshipped a pillar called after their chief god, Irmin or Arman, the god who gave his name to the Irminsul. This is an important point to consider when reading this post.

(*) Caedwalla is a name which means 'Caed'-'foreigner' and thus seen to be of British (Welsh) origins, although this is by no means certain since it could refer to anyone outside that particular tribal group.

(**) 'Frith' here I have translated as 'peace', though the term is a bit more complex than that.

(***) I have used the spelling 'Krist' since there seems no evidence to suggest that these twin-kings were converted by Roman Christians. There did exist a different form of Christianity so I have chosen to use this spelling to make clear the difference.

(****) If we view this as some form of hidden order which von List seems to speak of we may not be too far from the mark. It has been recorded throughout the history of the European Kings that most of them were members of some form of Hidden Order or 'Occult Lodge' (they mean the same). Even today some of the Royal Family here are members of the 'Order of the Garter' or some other 'lodge', though these, of course, are nothing at all like the ancient orders and indeed work through the Counter-Initiation. A more apt example would be Vlad Dracula who was of the 'House of Dracul' - 'House of the Dragon'. These orders were for the aristocracy, though the merchants also had their guilds etc. Even today, in the 'Age of the People' we see the hidden hand of power working through such secret societies as 'Common Purpose', another branch of the Counter-Initiation. We find the concept of 'The Wise Ones' being usurped by the Counter-Initiation through the Illuminati when we analyse the name of its founder - Adam Weisshaupt. The name means 'The First Man of the Wise' or 'The first man of those who know'. Evidence shows clearly that the Counter-Initiation does not create anything, it merely usurps for its own purpose.

(*****) Yet another synchronicity since we have the same meaning 'to give birth' as the meaning of the prefix ean. 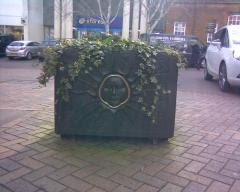 In the above photo of a stone placed in the town of Banbury we can see the connection between the area and some sort of Solar-Cult, a clear Solar Symbol being carved upon the stone. This is no doubt connected to some old legend or maybe it is mere 'synchronicity', nevertheless it is obviously connected to the area. Unfortunately the original 'Banbury Cross no longer exists so we do not know what symbolism (if any) it had.