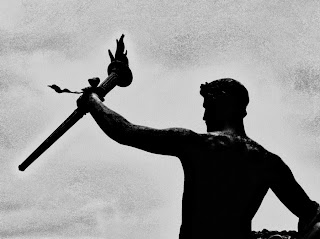 The term 'eugenics' is usually applied to 'the study of methods that can be used to improve the human race'. In application this is seen to be the methods used to produce higher intelligence. Actually, this is not the same as 'Selective Breeding' which can be used in a different way, nor exactly the same as Racial Hygiene which is used to produce a healthy race, not necessarily based upon higher intellect. There are two distinct and opposite ways that 'selective breeding' can be used -

We should consider this now in the light of the scientific work on 'Artificial Intelligence'. Before I go into this we need to understand that there was an ancient Aryan Caste System which was based upon the Divine Order and linked to the Cosmos and the Human Body - the macrocosm and the microcosm. This was a natural system based upon the Eternal Laws of Nature. The 'class-system' was an artificial construct. Racial Hygiene is a perfectly natural drive to maintain a healthy Race of Man, 'selective breeding' can be used for other unnatural purposes.

The Laws of God are the Laws of Nature, but when the Dark Lord arose to try to make himself 'God' Nature lost Her sacredness and 'God's Commandments' were there to be obeyed over and above the Laws of Nature. These Dark Powers have destroyed the Aryan Caste System through the promotion of a false 'equality', but what they wish to do is to replace this natural order by an artificial construct which goes against the Laws of Nature.

We find these ideas stated clearly in Huxley's Brave New World, that the produce-and-consume society will run efficiently by using the idea of 'selective breeding' in order to create a new hierarchical system that would suit this aim. Thus the 'Central London Hatchery and Conditioning Centre' where children were produced on a factory level; again, they have taken something that would become necessary for racial survival, and twisted it to suit their own twisted aims. But in doing so the male-female relationship was by-passed by using an unnatural system of fertilisation and artificial births.

The process was based upon 'incubators' for Alphas, Betas, Gammas, Deltas and Epsilons, which were the different 'classes' needed to create the most efficient produce-and-consume system. 'The principle of mass-production at last applied to biology.' The interesting part is that it is said that the Epsilons - the workers or slaves - 'don't need human intelligence'. Here we can perhaps see the aim of this 'Artificial Intelligence' and why the use of 'robots' has replaced human labour in much of the mass-production in today's world. Robots were merely a step towards creating 'Intelligent Robots' who would work far more efficiently than human labour (slaves) and would not rebel. This seems to be the logical solution as to what is going on today, because they would need a 'tier-system' in order to create the most efficient society based upon produce-and-consume.

The standardisation of life which has been going on for a very long time is now coming to its peak, where highly efficient slave-labour can be used to perfect the produce-and-consume society. 'A love of Nature keeps no factory busy.' This is based upon the typically Old Testament sentiment where man is there to dominate the Earth. This is clearly stated in Genesis. This goes on -

'What man has joined Nature is powerless to put asunder.' We can see the utter arrogance of this, and the utter contempt for Nature and Natural Law. Everything is an artificial creation, and artificial construct, and in order to do this everything that exists has to be destroyed and then replaced. This is why we see this mass-destruction of culture, tradition and identity; this is the prerequisite to the 'New World Order which has to be 'created' on the destruction of the natural world.

'The machine turns, turns and must keep on turning - for ever...(machines worked by)...sane men, obedient men, stable in contentment.'

Although the idea of 'eugenics' was first introduced in order to counter the growing trend towards the production of the most children by those of lowest intelligence it has become the tool of the Global Elite in their pursuit of a 'perfect' produce-and consume society of masters and slaves. Anyone can see that we no longer live in a healthy society, and the amount of sickness is higher than at any time in the past. People wallow in being sick and unhealthy, and promote the sick and unhealthy to the top of the ladder - all done deliberately. This is destroying our Folk, but in the coming society this does not matter because their aim is to recreate mankind by selective breeding and by creating a mass of mindless, willing slaves through 'Artificial Intelligence' and the 'World Brain'. Thinking will no longer be possible - only obeying.

In the service of a higher cause and in the survival of a people, obeying should come natural; what I refer to here is a society which is deemed to be 'eternal' and not just built for a specific short-term necessity. Obeying orders that are there to help a people to survive is a different thing from obeying orders that enslave the people. The type of society envisioned by Huxley is based solely upon gross materialism and the physical world; there is no room for the Spirit of Man in such a society. This will, if not stopped, bring a halt to human evolution. Yes, their objective is also to bring 'immortality', but again this is of the physical body and the aim may be aimed at the 'Elite' rather than the 'slaves'.

Such a world as envisaged here would be totally and utterly boring; that this can become a reality is seen when we look at the section of society ('Cultural Marxists') who are continuously moaning and groaning about their lot and the lot of the 'oppressed'. Every bit of the present has to be destroyed to be replaced by their new ideology (not quite new), and in doing so these people are continuously moaning about everything. There is nothing whatever positive in what they do, only the negative drive towards destruction and control. Then we have, in the opposite direction, the 'Capitalists' sitting in their Rolls Royces with miserable faces. Such a world, governed at different levels by such people, will certainly not be a happy place, but will be a miserable, boring world ruled by miserable, boring people. This is why they would have to use the 'Soma-drugs' to create some sort of artificial 'happiness' and 'contentment'.

The only problem is that it seems that we have been here before; ancient legends tell of how the mass of people rejected the Ur-Religion of Light and became corrupt, degenerate and ungodly, eventually turning against the Gods. From the legends this has happened a number of times in this Cosmic Cycle. At the point of no return, when everything has collapsed into a world without God or Gods, when the masses of people have come under the influence of the Evil Forces, then the Gods (or the 'High God') cause a massive catastrophe that destroys the world and the Evil Forces, leaving just a remnant of humankind to start the process again. We seem to be nearing this point now. We need not concern ourselves now with the ideas on what will happen, but there is a need to further our Spiritual Revolution by recreating the Ur-Religion of Light.