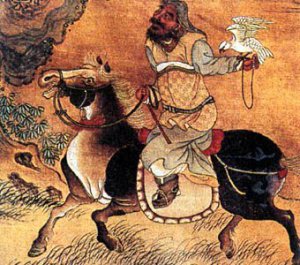 In the above we see the famous 'Mongul' - Genghis Khan - from a Fourteenth Century portrait in the 'Party Museum' in Beijing, China. Here the young Genghis Khan is seen as a Caucasian. 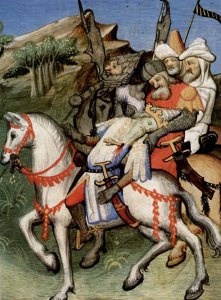 This is from the 'Death of Genghis Khan' by Marco Polo; clearly, again, Genghis Khan is a European. He is of the "Tribe of the Blue Wolf' and had blue or blue-green eyes according to accounts. Notice that he rides a White Horse, as accounts have shown him. 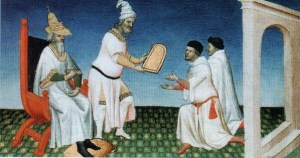 Recognising the archetype the burial-place of Genghis Khan was never found; he was said to appear riding a White Horse, confirming the archetype. His ring- so they say - had upon it the Swastika.

The archetypes of AEtla the Hun, Genghis Khan and Hengest are important to us in that they show a continuance of the struggle against the 'slave-religions' - the 'Religion of Evil'. Both AEtla the Hun and Genghis Khan were name 'The Scourge of God'. The struggle continues into our era.

(Thanks again to Coid Mor for this information; this stuff is important in learning our true history.)

*** Note that this is also proven in a blog by Wotan's Krieger on 'Aryan Myth and Metahistory'. Sorry mate, must have missed that one! (October 2016). He traces this from the ideas of Savitri Devi who gives quotes on Genghis Khan as the 'Man in Time'.