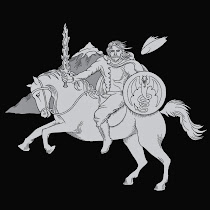 The most important god-force of our own era is Wid-Ar, so I am here going to give some fuller details of the figure of 'The Avenger' or 'The Silent God'. Yes, Wid-Ar is silent because this is the 'calm before the storm'. His appearance is due at the beginning of the Age of the Water-Jug (Aquarius). It would be wise here to show why I use this strange spelling of the Norse Vidar, a word usually linked to the idea of 'wide'.

Wid-Ar is taken from the German 'Wid' rather than Norse 'Vid', and I have used a hyphen to break this into two sound-roots 'Wid' - 'Ar'. The Root Ar as I have shown in earlier blogs is related to the Black Sun. Wid-Ar is the god-force that returns at the end of a 26,000 year Cycle of the Ages, and his name is rooted in words meaning 'return', for example -

Wieder - to be back again, to come back, to return.

Der wiederspruch - to go against.

All of these words are linked to the idea of 'to return' or 'to come back'; hence the idea that Wid-Ar is 'He Who Returns'. But there is also another idea that we can find in the term 'widdershins' which means 'to go against', usually referring to an anti-clockwise or anti-sunwise movement. Here we have the idea of a movement against the run of things, like the Salmon that swims upstream against the current of the waters. Also like the Man Against Time and the Widdershins Swastika whose movement is against the flow of time, time ever moving towards decay and death.

There is another important concept here, since the term Widerstand means 'resistance'; the Old English widre means 'resistance' or 'to stand against', clear by the word itself. Wid-Ar is the God of Resistance who stands against the oppression of the Folk. His symbol is the Wolf-Hook Rune which is the Rune of Resistance.
The German word widder means 'ram' and Wid-Ar may thus be related to Aries the Ram (Mars), and to Hama/Heimdall. This association is clearly symbolic since it relates to the spring-time of the yearly cycle, as well as the spring-time of the Cycle of the Ages, hence the appearance of such a god-force at the beginning of the Age of the Water-Jug. This is the time that follows the harshness of winter, the coldest and most destructive period of the yearly cycle, as well as the Cycle of the Ages. 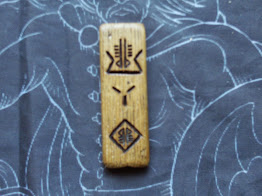