In a few weeks we shall be celebrating England's Day - April 23rd - which is the Day of the Dragon-Slayer. The Dragon-Slayer image is very important to us through its symbolism; rather than the Christian 'St. George' this day is in honour of Sigurd-Siegfried or Siegmund, Father of Sigurd (he is the 'Dragon-Slayer' in Beowulf). We can find the idea of the 'Dragon-Serpent' as the 'Great Red Dragon' mentioned in Revelation who represents the Forces of Evil, Darkness and Chaos. But we can also find a similar reference from ancient Persia.

in theIn the Iranian Yasht (19:41) we find the following statement - "The 'yellow-heeled' dragon of the druj emerges from the deep to destroy the living world (creation) of Asa." The word druj or druh means 'lie' or 'falsehood' which is the essence of the Dark Forces. Here this Evil Force is symbolised by a 'yellow-heeled dragon', and this appears from 'The Deep' - the 'Shadow-World'. Asa is the equivalent to our own AEsir - the Gods.

A later Ninth Century Iranian text called Pahlavi tells us that towards the End of Time Asa and Airyaman (Aryaman) will together come upon the Earth to do battle with Az - the 'Demon of Greed'. If I am correct here I recall some notes I made years ago with the term 'Az' meaning 'Serpent'. The term Asa derives from the same root as Aryaman; Aryaman is here seen as the epithet of the saviour-figure of Iran - Saoshyans.

We can recall that the 'Great Red Serpent' tried to slay the Man-Child born of the Virgin 'Venus', just as at the beginning King Herod is said to have committed the 'Massacre of the Innocents' in order to slay the Krist-Child. A similar tale can be found in the Legend of Krishna. In order to slay the 'Divine Child' the Great Red Dragon unleashes a 'flood' - a symbolism used of a pandemic in the Book of Sajaha.

These prophecies are spot-on in regard to the nature of the 'Serpent of Evil', since this refers to the 'Father of Lies', a term The Krist used against the Scribes and Pharisees in Matthew - this is a force of deception and lies. The reference to Az (The Serpent) refers to the 'Demon of Greed' which is another side of this Evil Force, as we can see clearly in the time we are living through now, when the Servants of Evil are squeezing every bit out of the people, and grabbing more and more profits for themselves - millionaires have now become billionaires! 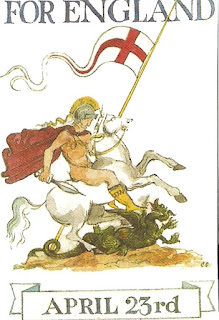 On April 23rd we shall honour the 'Dragon-Slayer' and celebrate England's Day, even though we may be the few amongst the many.
Posted by Wulfinga at 09:24