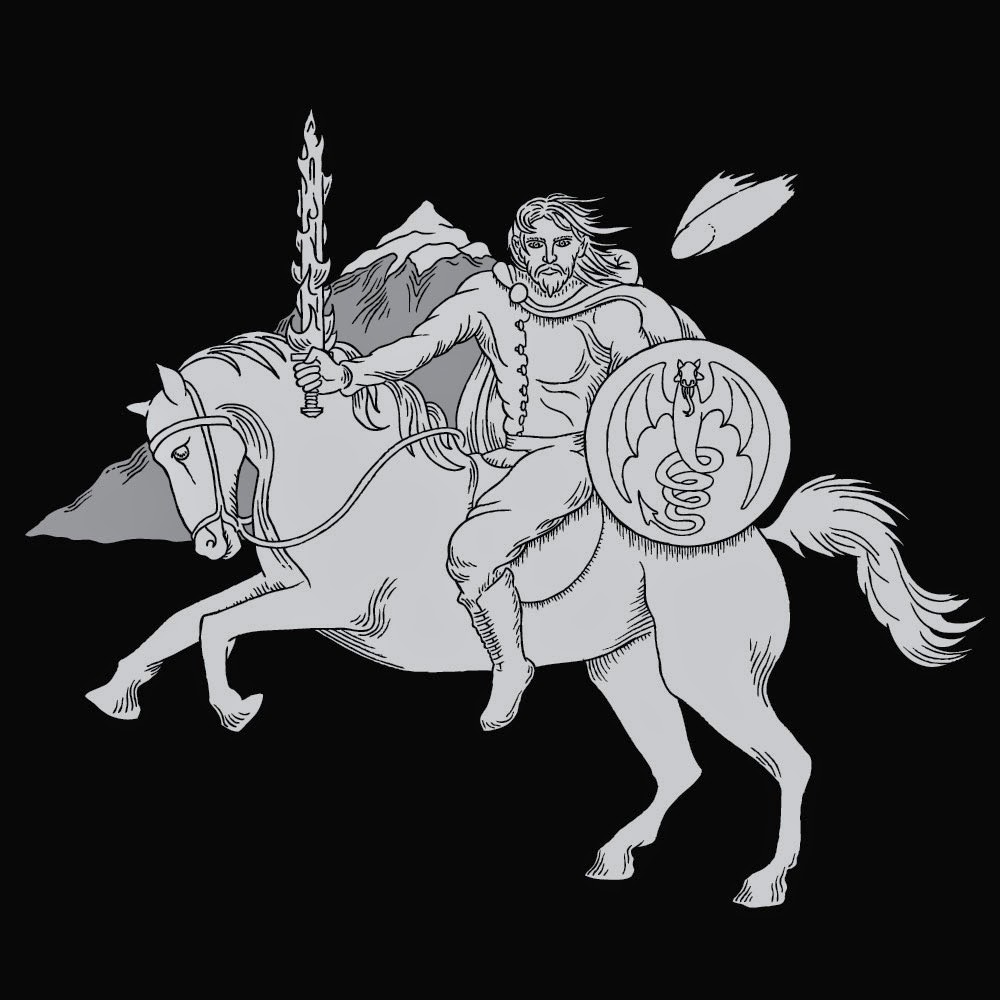 The new archetype or god-force for this current world-age (Age of Ing) which was 'conceived' on August 11th 1999 and 'born' nine months later in May 2000 is Wid-Ar the Avenging Son. He is The Hooded Man and also HelgiH - Spirit 88 - and the Son of the Widow - the Divine Fool. In the above drawing we see Wid-Ar the Avenger and his symbolism -
- The White Horse which is the Steed of Woden and the symbolic steed of the Last Avatar (Kalki Avatar).
- The Flaming Sword which is the 'Sword of Hengest' named Battle-Flame which is the 'Hun-Bequest' - the Sword of AEtla whose power was thrown against the Jotun, and whose wyrd passed to Hengest of the Saxon Nation, whose wyrd was once more to counter the growing menace of the Jotun-Religion (Religion of Evil)here in England. The flames represent the Inner Fire and the Serpent-Fire as well as the Flame of Freedom.
- On his shield is the White Winged Coiled Serpent (White Dragon) which is symbolic of the English Folk. Note the 3 1/2 coils which represent the Fire-Serpent and the Kan-Force (kundalini).
- In the background is the Sacred Mountain (Mount Meru) which is symbolic of the Sacred Centre which is the origins of the Last Avatar and is associated with Waendal who is the Cosmic Turner and who turns the World Mill around through the Precession of the Equinoxes.
- To the right of his head is a streaming comet which is the Hale Bopp Comet of the spring 1997 which was sent by Wyrd in order to reveal the Helgi Mysteries and to prepare the way for the creation of Woden's Folk the following year (1998).
The recognition of Wid-Ar as the Coming Avatar is what separates Woden's Folk from the other Wodenist groups, since the Woden Folk-Religion is the only Religious Order that has taken up this concept - what we are now calling the Wid-Ar Current. This is important since WF was set up to prepare for the Last Avatar and that is exactly what we have done. The latest reorganisation of WF and the WFR serves to further this cause and whatever springs up from this will further the struggle of Wodenism even though it may not seem that way.
Both Odinism, Asatru and Wotanism, as well as the Wodenist groups outside the WFR, are doing their part in this great struggle by reviving the ancient religion of Northern Europe. But the WFR has a particular Divine Mission to undertake within this struggle, and that is to prepare the way for the Man to Come here in England. The Wid-Ar Current is the key to our success in the end.
What I have written here was first stimulated by some stuff that Wulf Veldasson sent me on the ideas of Dumezil. The rest I put together myself from my own research and intuitive ideas.

widerspruch - 'to go against'.


The first four suggest He Who Returns whilst the last one suggest 'resistance', and we find the term widder (German) and widre (English) having the meaning of 'resistance'. We can see here that Wid-Ar is the God of Resistance and his symbol today is the Rune of Resistance - the Wolf-Hook Rune. It is also interesting to note a term used in modern Wicca - widdershins - which means to go anti-clockwise and thus 'against' the norm. This can suggest to us that the god Wid-Ar also links to the idea of the Man Against Time (Savitri Devi) and also the Widdershins Swastika (anti-clockwise Fylfot).
Agni (The Fire) is the Son incarnate of the 'Heavenly Father' (All-Father), conceived and born of the Virgin Maya, who had the carpenter Twasti as his earthly father. In the Cave of the One of Both Sticks who has the name 'The Mother', lives the Goddess Maya, the embodiment of Creative Powers, who gives birth to the Son under the influence of Vayu ('Spirit' i.e. Woden), the breeze of the wind without which the Fire cannot be lit. The first spark that came from the Cave (cavity) of the sacrum of Maya, by turning the Fire-Twirl (Cweorth) Pramantha (Swastika) represents the birth of the Agni-Fire (Inga-Fire *). This 'spark' is called The Child of Light.
* INGA = AGNI spelt backwards.
This is the true myth of the Aryan Krist who is directly related to Ingwe as we have seen in the name 'Agni' itself. The turning of the Pramantha was actually related to the Divine Twins (Aswins) which is a Swastika-shaped 'wheel' that turns upon a central axis ('Womb of the Mother' and from which (the centre) comes the Divine Spark which is seen to be the 'Son' or Divine Child.
We can see how Wid-Ar is no minor god, nor a god of the future, but is the resurrection of Woden as the Avenging God who appears after Woden is devoured by the Fenris Wolf (World War II when Wotan was 'devoured' by the Forces of Chaos) and is resurrected in the spring-time (as The Fool) as Wid-Ar the Avenger.
"He returns as an Avatar, the incarnation of a god, Wotan, Vishnu, occupying, momentarily and for short periods, various bodies of Viras at the same time, even when only one among them is his favourite, his energy-centre. Someone who was carefully prepared to receive him. Thus the Avatar is a Tulka, who is more than one, being various and being many, each one his 'Furious Horde', his 'Ultimate Battalian'."
Miguel Serrano
Hail Wid-Ar! Hail to the Avenging God! For the 'Man to Come' and the 'Resurrection of The Fool'.