Awakening of The White Dragon

The revival of the White Dragon Banner started back in the mid-1980's through the original White Dragon Kindred. Woden's Folk was formed on April 23rd 1998 and took up the revival of the White Dragon, which soon spread when it was made into a flag by the English Flag Society, who worked separately in reviving the symbolism, although the idea was put into the magazine of The English Companions (using the pseudonym 'Folk-Wolf') so we cannot tell whether it had been taken up from here or not. Whatever the case the White Dragon was revived and spread through Englisc Nationalism.
The symbol spread very quickly, and at one time I did warn that we would be well not to totally discard the English Cross which began to be suggested. This was only because the White Dragon was, and still is, not well known amongst the English people at large, indeed when it is used many see it as a 'Welsh' flag. There have been arguments against its use because there is little historical evidence to show that the English used it as a symbol. This really does not matter at all since it is the symbolism that counts, and this symbolism is relevant to our struggle today.
The White Dragon is the symbol of the struggle against the Red Dragon of Juda-Rome, the 'Great Red Serpent' mentioned in Revelation. The 'Red Serpent' or 'Red Dragon' is symbolic of 'Rome', the 'Treaty of Rome' (The EU), the USA (which sports the Roman Eagle as its symbol of imperialism) and the British State. It is also the Serpent Rouge of the Priory of Zion. The conflict of the Red Dragon and the White Dragon in these islands goes back into the mists of time, and the use of the symbol as a Saxon Symbol (by some Welsh chroniclers) is interesting in that the Saxons came to these islands to counter the growing Judaeo-Christian Church which was taking control here. The later Vikings took up the struggle against the Christianised English, some of whose rulers were backing the growing Frankish Christian Empire - the Vikings came over in their Dragon Ships. 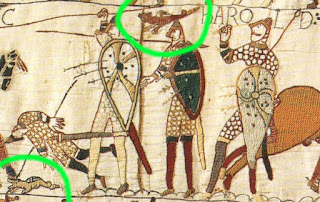 On a section of the Bayeaux Tapestry we see a Golden or White Dragon (wind-sock) on the ground, suggesting that it is the symbol of the defeated English, whereas a Red Dragon flies above it. This is significant, since it shows the Red Dragon triumphant. In 1485 the victory of Henry Tudor (Henry VII), who fought under the Red Rose and Red Dragon, secured the ultimate defeat of the White Dragon (White Boar in this case, since Richard III used the White Boar and the White Rose).
An exceptional book that concerns itself with the Battle of Bosworth is 'The Battle of Bosworth' by Michael Bennett. The front cover illustration is of Henry Tudor recovering the crown at Bosworth, but below this is a White Dragon shown on its back in defeat, together with the sceptre and crown - a White Dragon! True, the dragon shown defeating it is also white, and not red, but the symbolism is still very interesting. I am not suggesting that in either case these were put there deliberately, but since Archetypal Myth works in subtle and hidden ways they may be unconscious workings.
Now we see the importance of the White Dragon since this period is one of the rebirth of the English, of the regeneration and renewal of the English Folk-Nation. But this has a specific importance here in these islands - the White Island (Albion) - which I am now going to relate. The Vedas allude to a 'White Island' or 'Island of Splendour' but this is usually taken to be a mythical realm. But we also have the reference to Scef coming to the Island of Scandi, a name also meaning 'Island of Splendour' or 'White Island'. Again, this is taken to be a mythical realm. But looking to the last post about Iggdrasil & The Runes if such a Holy Island exists in another realm or world then it has to have its parallel in this physical world. Thus, we could surmise that Albion is the area in which this mythical realm exists in another dimension. The symbol of Albion was the White Rose, and we can assume also the White Dragon.
In Wodenic Lore the Seven Swords of Wayland are symbolic of the Seven Tribes of Ingwe who have come together in these islands, and who make up the English Folk-Nation. These tribes have come from Northern Germany, Frisia, Sweden, Denmark, and Norway through the 'Anglo-Saxons' and the 'Vikings'. Northern Germany and Scandinavia were populated by the Ingwaeons ('Friends of Ingwe') who have thus united into one nation here in these islands. The Seven Swords of Wayland are a counterpart to the Seven Swords of the Seven Sons of Mimir. These swords are taken up just as Ragnarok approaches. These Germanic Tribes have united under the White Dragon Banner.

The Seven Swords of Wayland are thus an important symbolism, even though they are found in a TV Series (remember that all this is archetypal); the Seventh Sword of Wayland is named 'Albion' and is wielded by The Hooded Man. Albion is an ancient name for England, and since Hengest is one of the Divine Twins, and thus Divine Ancestors of the English, he is the same archetype as Ingwe (and also The Hooded Man). In previous articles I have likened the Seventh Sword of Wayland to the Sword of the Wolsungas, i.e. the 'Broken Sword'. Albion = The White Island = The White Dragon.
The arguments against the authenticity of the White Dragon as an English Symbol are a smoke-screen to divert the attention away from the importance of the Inner Symbolism which works at a subtle level that can be seen throughout history. The revival of the White Dragon came with the revival of an English Consciousness which itself resulted in the rise of a new Englisc Nationalism, which grew stronger and stronger but floundered due to its lack of strong roots. This is a point of importance because for anything to grow strong and healthy it has to have strong roots.

From an Inner Centre - a Mystical Centre - came the orders to certain Aryan Initiates to move their peoples to the Land of Albion. Thus the Seven Tribes of Ingwe came together in these islands in order to prepare for the Final Conflict between the Island Dragons - the White Dragon and the Red Dragon. Today we are witness to the fact that certain people are 'driven' or 'lead' by an Inner Drive to achieve some set purpose (destiny?). And so it would have been in the past. In order to understand thus further we need to get to the roots of the nature of Ingwe.

Ingwe is the Divine Ancestor of the English - the Inglingas ('Sons of Ing') - and he thus ruled over this Germanic Folk way back in the times when the continent of At-al-land existed, prior to its destruction which may have started some 8,000 years ago. Ingwe was a Germanic God (later known as Frey), and his incarnation marks the creation of the English Folk. He was also known as Sceaf/Scef whose legend tells us he was sent to the Island of Scandi ('Island of Splendour' or 'Shining Island'); his legend was also that of Hama/Heimdall. (It should be noted that these are archetypes and thus differ in form and essence.) The White Dragon is thus also symbolic of Ingwe.

At this point I am going to look at the TV Series called The Vikings which is certainly not 'historical' (if there is any such thing since history is often distorted) but which has a certain essence of interest to us here. The usual interpretation of the Vikings coming to England is that they came due to lack of good land to work, or because of something that displaced them from their lands. Well, may be there is some truth in this, but with all events there can be found an 'inner' meaning.

In the series Ragnar Lothbrok is the one who has the 'drive' to lead others to the 'West', to the Land of Albion. But, as clearly shown in the opening scenes, he is guided by the god Odin. It is Odin that guides him to go westwards to these islands, as if guided by an 'Inner Voice'. Yes, the outward drive is aimed at plunder and the acquisition of wealth, which is a 'human drive', but this is certainly not the Will of the Gods. Of course, we do not see this aspect, but as in the historical Viking incursions the target was the Christian Church which here in England supported Charlemagne who was spreading the alien Middle-Eastern religion across Northern Europe with fire and sword. So we can see an 'Inner Drive' that is not obvious to the majority of scholars. It is likely that the same applied to the earlier Saxon incursions and invasions.

The Royal Dynasty of Sweden (the Swedes being very much part of the early Germanic Tribes as shown by the Wuffingas) were the Ynglings, and the early Royal Dynasty of Norway were also Ynglings. So we have here a number of Scandinavian Tribes claiming descent from Ingwe. Admittedly, we cannot link any of these to the White Dragon, but since we do have the link made by Welsh Chroniclers these people certainly knew of the symbol used of the Saxons. In the Mabinogian we have a reference to the Coiled Golden Worm of Germany which refers to the Golden Dragon of the West Saxons. I have already shown that there is an underlying reason in using the White Dragon and not the Golden Dragon.

It is important to recognise that in Wodenic Mythology the Sword of Hengest ('Hunlafing Hildeleoman' - 'Hun-Bequest - Battle-Flame' [*]) passes from the 'Hun' (German) to the English, wielded by Hengest ('Ing-Geist' = 'Spirit of Ing'). The Wyrd of AEtla the Hun passed on to Hengest, and we should recall that AEtla the Hun burst upon the Roman Empire and almost overthrew it. Hengest took up the Wyrd of AEtla when his Germanic Warriors threw themselves against the Christian Welsh (Roman-Britons), aided by the Scots and the Picts.

[*] It is interesting to note that in the Glossary of Beowulf (Wyatt & Chambers - 1914) the term hilde-leoma is translated as 'Flashing Sword' in regard to the piece about the Hunlafing Hildeleoman, which relates directly to the Flaming Sword wielded by the Kalki Avatar. There is also a later mention of hilde-leoman (Beowulf 2583) which is translated as 'Battle-Flame (of the Dragon)'. This seems to be a case of synchronicity kicking into play, since the result can be seen as "The Battle-Flame of the White Dragon".

The White Horse and the White Dragon are interchangeable symbols, both being Solar Symbols. But the horse is also symbolic of the Shaman's Steed which travels between the worlds, just as Sleipnir - the Eight-Legged Steed of Woden - is used for spirit-travel. What we need to recall here is the meaning of 'dragon' which is -

The 'dragon' is the 'Coiled Serpent', but it is also the 'Fire-Serpent' or Kundalini, which is the 'Fire of Ingwe' or 'Inga-Fire'. As you can see this is a very complex subject; at each turn it comes back to the Inga-Folk - the English Folk. The Red Dragon is the 'Satanic Dragon' which encircles the world, enslaving the peoples of the world as it does so. The White Dragon represents the opposition to the Red Dragon, it represents the freedom of the Germanic Folk.