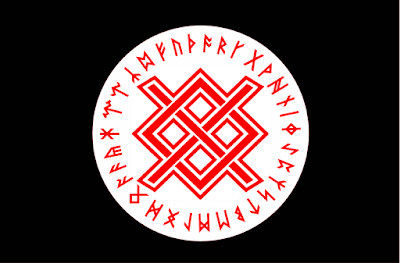 Hamasson sent this design to me and since it is a good way to show everyone the Ar-Kan Rune-Row I thought that I would post this straight away. For those who are not too familiar with this I shall list the rune-names below. The system is split into Four AEttir each section with eight runes, and the Gar-Rune ('Spear of Woden') represents the Cosmic Axis and Spiritual Centre -

Ior (Pronounce all of the letters)

Ear (Pronounce all of the letters)

The rune-staves are those we use as standard, with certain variations in some of the runes, variations which suit whatever reason we are using them for. The two runes which have changes are the Haegl-Rune and the Stan-Rune; the alternative runes are shown below -

For those who are interested in working with the Ar-Kan Runes Woden's Folk will be publishing our Online Magazine - "Spear of Woden" during 2019 and this issue will cover as many aspects of this system as we can get into the issue. This is available from Woden's Folk by sending £10.00 Sterling through the following PayPal address -

The magazine will be published sometime in 2019, most likely during the first half of the year, and will contain information on the runes and everything about the Ar-Kan Rune-Lag.

This issue of the magazine will be sent to you through email in PDF Form, and you will be able to print it off to make things easier. We are going to try to cram as much into the one issue as we can so that you can have a working knowledge of this runic system.

When sending through PayPal please ensure you give an email address to send the PDF Online Magazine to. Thank you.