Over the Yule period I watched the Nineteen Eighty-Four film which was released in 1984 and starred Richard Burton, John Hurt, Suzanna Hamilton and Cyril Cusack. Having read the book a few years ago, and also writing a piece on this revealing how so much of it has become reality in our times, I decided to watch the film, even though it was rather boring as it turned out. 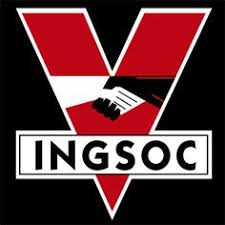 Some have tried to link Orwell's totalitarian state to the Nazis, but as clearly shown in the logo above 'Ingsoc' means 'English Socialism'. and although the colours White, Red and Black are used this does not fit with the message that is clearly imposed upon this logo - the clasping of a White Hand and a Black Hand. This message was not restricted to this film and has been used over and over again within messages designed as a propaganda exercise for the Global Order. The image is that of 'Black and White Unite' which is a leftist propaganda slogan. The film tried to infer that National Socialism was the basis of 'The Party' but from Orwell's other works we find that he attacked not only Nazism but also Egalitarian Socialism and Marxist Communism, even though not naming them directly.

But there is something else about this logo, and that is the "V" symbol which has also been used in the 'V for Victory' symbolism of VE Day and other celebrations. I believe that it was back in 1995 with the fifty years celebrations that a VE Day logo was created in such a way that the occult imagery was quite obvious. Unfortunately, I have lost the cutting that I had from the time and cannot find any trace of this symbol online, so I will have to describe it as best I can remember it.

I recall that it had the usual 'V' image but this was within a kind of 'fire-basket' with flames and (I think) a torch. This is as far as I can recall the imagery, but it certainly looked like similar occult symbols, especially the 'torch' which features on the image of 'Baphomet'.

In the above we see the 'V for Victory' mudra which was used during World War II by Winston Churchill, who is said to have had certain occult links. What is interesting about this symbol is that it was said by Aleister Crowley to be the Symbol of Typhon the Destroyer. Crowley worked for British Intelligence and it seems that through them he passed this symbolism to Churchill who approved it and henceforth used it as his personal 'V For Victory' symbol.

In Crowleyan terms ISIS-APOPHIS-OSIRIS (IAO) stood for the destruction of Nature (Isis) by Apophis the Destroyer, and its regeneration though Osiris 'slain and risen'. This seems to be from the Golden Dawn and is a modern interpretation of the Gnostic IAO formula. Apophis is Typhon or Set, and this is the Dark God worshipped by the Hyksos who usurped the power of the Egyptian Pharaohs and ruled Egypt until they were overthrown. Apophis is the 'anti-god' of the Egyptians. Some think that this symbolism ('V') was used to destroy the power of the Swastika, hence Crowley's involvement in British Intelligence and the use of the symbol by Churchill.

Clearly the use of the above occult symbolism has been used to further the aims of the New World Order which arose out of the 'victory' of World War II, even though in fact it was far from this since it cost the lives of millions of Europeans, and Britain hardly 'won' since the British Empire was carved up in order to forge the basis of a One-World State. How many nations in history have 'won' a war and lost territory in doing so? Ever since then Orwell's idea, 'WAR IS PEACE', took hold through the continuous wars since then followed by the ever-continuing 'War on Terror' which is still going on into the future.

I have been over the symbolism of the figure known as 'Baphomet' as shown above, but will repeat this here for convenience -

Clearly the message given in this film is that of a future totalitarian state, and that this state is, like we are today, ruled by 'socialism'. There is a growing backlash against this leftist control which imposes restrictions on freedom of speech and movement. The raid by the Thought Police mimics the 'Dawn Police Raids' used today against those who oppose this corrupt system - left or right, or anyone else. The use of hidden cameras has come about in a different way through CCTV which is openly used, and openly accepted by the gullible who see it as a means of 'fighting crime' - even though crime is rocketing out of control, proving this is not working at all (or is not designed for this).

What Orwell did not foresee was the extent to which this control extended, for in his work the 'proles' were far freer since it was the party members who were the subject of complete control. Today we see that the 'party-members' extend through all bureaucratic levels of society but the 'proles' are also controlled through propaganda, and used to further the aims of the state, whether through the violence of the mob or through passing information to the system. That control seemed almost complete until recent months when a growing opposition appeared from nowhere. There is obviously something deeper working here.

I am assuming that the 'Ingsoc' image was created for this film and not the idea of Orwell himself; it is certainly the work of the Counter-Initiation and a useful tool in their Eternal War against the Forces of Light and Order. It is still being used today, long after World War II. Where the problem lies in researching this is the mist that surrounds Aleister Crowley and his work; he is not exactly a good example to live by. Neither is his work clear either since his 'Book of the Law' is clearly anti-democratic, anti-people, anti-equality and yet here we seem to have him on the side of 'democracy' and 'equality' since this was the force that became dominant after World War II. In his list of 'saints' he mentions Adam Waushaupt who created the Illuminati on the basis of 'Liberty, Equality, Fraternity' - the so-called 'Brotherhood of Man'. Some of the evocations he made in ritual are those of Dark Powers, although he may have evoked these to gain knowledge of them - we do not know. On the other hand he was clearly indebted to Friedrich Nietzsche and his idea of the 'Overman'.

One of the important things we need to remember is that symbolism is shown to be a powerful force in itself, and that any movement for change needs to have a powerful symbol that can be used to move the masses. The 'V for Victory' symbol invoking Apophis the Destroyer is such a symbol, as is the powerful Swastika which even today is rising again as an Aryan Symbol, Polar Symbol and Solar Symbol. This is the 'Fool's Foot' (Fylfot) which today resurrects the Divine Fool or The Hooded Man.

Note (added January 2nd 2019) - The 'V' sign seems to have been used as a kind of insult to others, as it is used today in the form of the opposite to the sign on the poster - where the hand faces towards the one using it. There are photos of Churchill using the sign in both of the variations, and presumably someone had to point out to him this error. 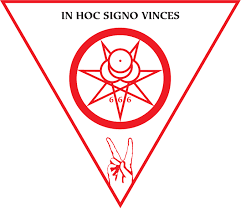 The above shows the Crowleyan use of the symbol but I have no idea as to whether this was his work or one of those who came after him and put this together. Since this is said to be the 'Sign of Apophis' this is something that needs to be looked into at some point. It is important because the name was taken up by one of the Hyksos Kings who invaded Egypt and through this king the ancient Egyptian Kingship was destroyed and gave way to the Pharaohs. In doing this, it seems, the ancient knowledge of resurrection and immortality was lost. It appears that the Hyksos and the Habiru ('Hebrews') were a kindred Semitic people who eventually merged to form the 'Tribes of Israel'. Apophis was the 'Serpent of Evil' and the polar-opposite to the Egyptian Ma'at - Goddess of Right, Order, Justice and Light.