The White Stone & The Seven Sages 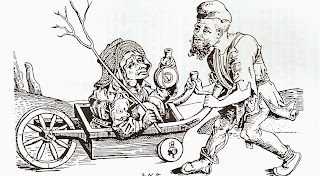 In various posts about the White Stone of Ing I have mentioned how the above 'barrow' seen here being pushed by 'Cuthman' seems to be symbolic of the Seven Stars of the Great Bear. This is also inferred when we consider Ingwe to be associated with Bootes who is the 'Driver of the Waen' (Great Bear). The 'Mother' shown here is the Mother of Revolutions who stands over the area of the northern skies where the skies turn around the 'axis' of the Pole Star.

According to Sri Aurobindo the Seven Rishis or Seven Seers are symbolised by the Seven Stars of the Great Bear. In many cultures these seven stars are seen as 'oxen' and we do indeed find mention of oxen in the Tale of Cuthman. In the tale Cuthman is said to argued with a local woman who took his oxen and refused to give them back to him. We have seen in recent posts how the Angiras Rishis are the offspring of Agni, who we see as being our own Ingwe, or a similar archetype. We thus have a link between the Seven Sages and Ingwe, even though this is not clear as yet.

It is interesting that the Seven Seers are associated with the Great Bear since this goes back to the Polar Mythos. When the later Solar Mythos emerged this was based upon the Twelve Signs of the Zodiac and the 'Seven Stars of the Pleiades'. The 'Seven Stars' image was transferred from the North onto the Zodiac and the Pleiades, even though this constellation seems to have only six visible stars. This suggests to me that we may be on the right track in assuming that the Myth of Scef-Ing goes back as far as the 'Golden Age' and the Polar Mythos, rather than the later 'At-al-land Cycle' of the North-West.

In a previous post I mentioned how the Hale-Bopp Comet was the herald of a coming cataclysm; it would seem then that the finding of the White Stone and thus the arising of the Power of Ingwe are two more signs of the future disasters that are coming. The White Stone came to light in 1938 when it was found in the churchyard in Steyning, West Sussex; this was one year before the outbreak of World War II. The Solar Eclipse of August 11th 1999 symbolised the 'resurrection' of Ingwe as prophesied by Nostradamus. This 'resurrection' was attained through the Power of the Black Sun. The discovery of the meaning of the White Stone of Ing was also important to this same theme.

The discovery of the stone's meaning is part of a prophecy in Revelation which states clearly the means of deciphering it. 'To him that overcometh will I give to eat of the Hidden Man-na.' In regard to the term 'man-na' (usually written manna but here the word is hyphenated, a hint of the true meaning), this is connected to the last two posts since the Moon-God is Mani or Mona. It seems clear that the Hidden Man-na is the intuitive power of the mind opened by the Moon-Powers. We should remember that these Moon-Mysteries are held within the Man-Rune.

The Stan-Rune that represents (within Folkish Wodenism) the White Stone of Ing is made up of two Man-Runes, one above the other and joined as one bind-rune.

Ingwe is, of course, Ingvi-Frey of the Norse Myths and thus the progenitor of the Inglingas (Ynglingas) who not only gave their name to the English Folk but ruled Sweden and Norway at one time or another. Ingvi-Frey is usually invoked for peace and plenty as a fertility god; however he is no 'pacifist' as the myths clearly tell us -

Clearly Ingui-Frea is a God of Peace but is also a God of Battle, and his roles change when needed. This fits with the True Krist who appears as a 'Teacher of Righteousness', a mild preacher, but in his 'Second Coming' he appears as a Warrior-Lord riding a White Horse and leading an Army of Light. Ingui-Frey seems to have been seen as the War-Leader of the Waene-Gods.

Ingui-Frea ruled the 'Swedes and the Goths' and Ingria (Ingermanland) was originally named Ingui Land; this is in the Russia-Finland area of the world and people there still honour their roots and Ingui-Frea. Ingui-Frea was called Drot by the Swedes, which is a type of ruler, though the word seems to be like 'Druid'. The English are the ones who have retained his name in their national name and national homeland. This is because the English are made up of the Seven Tribes of Ingwe.

Ingvi-Frey is linked to Uppsala in Sweden where a statue of this Solar-Phallic God once stood beside Thor and Odin. He was recorded as being a man who lived in this area and in death was buried in a large Burial Mound. As we have seen with Woden, there are gods who incarnate upon the Earth with a Divine Mission, and are thus 'human' in form even though they are a god-force. At this time, it seems, Ingui-Frea ruled over an age of peace and plenty, but this will not always be his role because he can return as a Warrior-God riding a White Horse.