Many young people (and older people) will not know how they are being deceived with the latest 'Climate Emergency' which is spreading like wildfire across the globe. Were they to check the not so far distant past they would see through this deception. 'Alarm bells' begin to ring when we see such rich and famous money-bags as Aileen Getty putting some £500,000 into the venture. This new enterprise is called 'Extinction Rebellion', a name that wreaks of scaremongering. Rather than a 'rebellion' this seems more likely to be a very clever trick of deception whereby those who have created the situation we are in today have come to realise that the resources they need for energy will run out so they need a complete change of tactics to introduce 'new' energy-systems. Hence the use of the gullible 'Greens' to do this for them.

Of 'Extinction Rebellion' it is said - 'It has grown into an international movement, backed by celebrities, academics and writers...' (The Telegraph). Compare this with a piece in the same newspaper dated October 6th 1990; this relates to a group being set up called 'Quiet Desperation' ('extinction', 'desperation') which are 'A group of concerned citizens - professional, media, academic - who view the future with grave foreboding.' This quote is given from The Guardian by Auberon Waugh writing in The Daily Telegraph under 'Way of the World'. He wryly notes - 'No "workers", you note'. Auberon Waugh then goes on to expose these people for what they are -

'Translated into plain English, the manifesto should read: We are a group of useless intellectuals who have just discovered that socialism does not work and are desperately in need of another issue to make us feel morally superior and self-important.'  This, of course, hits the nail on the head; in the latest manifestation of the very same 'desperation' over the environment we find these 'useless intellectuals' urging the same type of 'environmentalists' to become martyrs and face imprisonment, but this, of course, does not apply to those financing and manipulating behind the scenes whilst sitting in their ivory-towers.

In an earlier piece by the same writer in The Daily Telegraph he mentions a 'Rock Concert' being put on by the BBC 'as the crowning glory to a week of debates, lectures and children's poetry-readings on the subjects of the environment'. He also mentions another 'Rock Concert' held in Central Park, New York, where the same type of 'environmentalists' left behind 40 tons of litter - a bit like those who hold their annual 'Summer Solstice Festival' at Stonehenge with the approval of English Heritage (who claim that they do not approve of 'anti-social behaviour'). 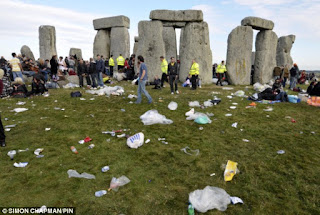 Things do not change much; the theme of the weeks events back in 1990 was 'One World - One Voice'. It seems that nothing has been learned from the past; we have the same old 'Global Village' twaddle being pumped into people through the same method of scaremongering about a global catastrophe, which, of course needs global action - i.e. a Global Dictatorship. If anyone still doubts the truth of this I would suggest they count the number of new laws that have been forced upon the English people in these past decades - laws designed to control every facet of our lives.

Logic shows us that as the world comes closer and closer together, creating larger and larger institutions of control, forming a vast bureaucracy spreading its web across the world, things are getting worse and worse. Stemming from the Old Testament dogma that man should 'dominate the Earth', propagated by the man-centred religions that have themselves dominated mankind for over 2000 years, the results are bringing the Earth to the brink of destruction. The twin forces of Global Finance/Global Corporations and Global Marxism are supposed to be polar-opposites but in reality are working hand-in-hand, as the farce of 'Extinction Rebellion' clearly shows.

Global Finance creates the wealth needed for Global Corporations to flourish and make vast amounts of profits. At the same time, whilst making these vast profits, the Earth's resources are being depleted rapidly. I will give one example here - bottled water. Water comes down from the clouds to the Earth; it comes down free of charge. From the water sources of the world it is collected, 'purified' (i.e chemicals are put into it) and then sold off to the consumers at a vast profit. That was how it was, but this rip-off does not end there now. Because of the purification process water now tastes worse than it used to, so consumers are fed the idea of using 'bottled spring water', which (of course) in many cases does not actually come from a spring. This has become a multi-billion pound industry world-wide.

The problem is that these Global Corporations tap the water from sources that have come from these springs, and the water-tables naturally get lower and lower. This is the reason that we no longer find springs scattered all across our once green and pleasant land. Then there arises the problem of 'litter' with the millions and millions of plastic bottles used for this purpose. To ensure that the people do not have access to their own water supply laws have been created; even if one drills down to tap water as these corporations do the water-authorities will no doubt charge to 'purify' this water - as if Natural Water needs any 'purification'. This has actually happened in the past.

As opposed to the vastly destructive globalism there is the alternative of an ecological movement based upon the concept of 'Think National - Act Local!'. Things have to get smaller and not grow larger and larger until the Earth is destroyed. The basic unit is the family (*) which is what we should look at in terms of self-sufficiency and self-reliance. Every family-unit should ideally be as self-reliant and self-sufficient as possible. Of course, the family cannot be broken from the larger unit, the tribe, nor from the idea of the Folk-Nation.

Each basic family-unit should be able to provide its own energy-supply, water-supply and waste-disposal. What cannot be done at a family level is done through the Folk-Community or Folk-Tribe. This also applies to food production which starts with food-growing by each family and hunting for food as has always been done. Again, this starts with the family through the Folk-Community where necessary. National interference should not be necessary in such a healthy society, not in regard to food, water, energy and waste anyway. Of course, surplus food or whatever can be used to barter outside the family or tribe.

I am going to give an example of how this 'localisation' would work better than the 'national' or 'global' system that is destroying everything. Years ago I worked at an organic farm in East Sussex and was asked to make a toilet-waste are by the use of bales of hay. This I did by stacking hay like one would lay bricks and the sewage-waste pipe was put into the middle of the stack. About 12-18 months later I was asked to take the whole thing apart to create a new stack. Somewhat sceptical of the outcome, I did so; there was in fact no trace of any of the waste, nor any kind of smell either. The waste is then scattered and ploughed into the land. This can be done at every family level, and there are alternatives to hay which are just as valid.

With the advance of solar-power and wind-power the use by a single family unit is now not out of the question. True, a massive wind-turbine in the back garden would not be feasible unless one had a massive back garden, but small wind-turbines could be worked upon as an alternative. Neither wind-power nor solar-power are any good on their own; here in England the Sun does not always shine throughout the year, and the wind is not always blowing. Combine the two and this could be overcome. There is at least room for individual experiment here. Water-power was once part of the energy-production and this alternative can be revived where possible.

The first step for any Folkish Wodenist is in food-growing which is a step towards self-reliance. This we are doing through the Edel-Project made up of a number of individuals within the Movement. Those who hunt and fish add this to their self-reliance. Alternative water and energy can then be looked at as to how efficient they would be to the family-unit.

Of course, all of this is today merely a pipe-dream because such an alternative would not be allowed here in England, nor for that matter in many other lands. Groups of people have got together to start an alternative community and are always attacked for their 'alternative views'; those who build upon system-values or wish to live in filth and squalor can do so, of course. If people wish to try to become more self-reliant they need to do so without attracting attention. The problem lies in that the mainstream system is designed to control every facet of our lives, and we stand against this because we believe that freedom is worth fighting for. Our forefathers fought and died to remain free of tyranny and oppression. This freedom is not just for us, but for our children, and their children, and their children............

'None are more hopelessly enslaved than those who falsely believe they are free.'