Joe Sevnson and the 55-Club has issued a new edition of the famous work by Don Miguel Serrano - Manu - The Man to Come. I had an edition published by Hermitage Helm Corpus in association with The Brahmanic Order of Kristos-Lucifer-Wotan which was kindly sent to me by Franz Berg, who translated the work from Spanish into English. I am thus in a position to review the book here.

In fact, this book was the first book by Don Miguel Serrano that I had the privilege to read, even though this was the last in his 'trilogy'. This book opened my eyes to a  weltanshauung that fitted the course of history going back into the most ancient times, to the time of Hyperborea-Thule. This was first published back in 2012, some nine years ago now, and the dating was no doubt deliberate and symbolic.

The work of Woden's Folk has in many ways paralleled that of Don Miguel, though we have gone about this in a very different way, and the emphasis has been upon the English and a coming English Folk-Hero (The Hooded Man) as well as the Last Avatar who shall appear at the Dawn-Time of the Age of Aquarius. In fact one person in the USA (who to be fair was not aware of what we had been doing for years) accused me of plagiarism; this was quite understandable in view of some of the similarities in our work to that of the Armanen Master. I had a conversation with this chap to explain our work and he too understood. I did not know at this time that Don Miguel was actually aware of the work of WF, and we do try to honour his name and to uphold the great struggle that he took up throughout his life.

This work is a complete weltanshauung and an esoteric library of knowledge, it is a book that must be read, and re-read, and re-read in order to discover the truths that are hidden within the pages. It is an esoteric work and not quickly understandable to everyone, but everyone will benefit from reading it, since it works at a very deep level of the mind. There is a large section devoted to drawings of the Armanen Runes, and a German text explaining the meanings (or some of them, some need to be discovered for oneself).

To save time I will paraphrase the book, and let you read it to fully understand what he is saying. The Divine Race once dwelt in the Land of Hyperborea, where they were spiritual beings, having the Divine Spark of the Gods. Due to the 'Racial Sin' of mixing their Divine Blood with the lower humans they fell from their divine position and Hyperborea was destroyed. The Gods had mixed their Divine Blood with lower mortals, thus losing their immortality. But this is not a permanent thing, for the Veras (Divine Heroes) can indeed regain their immortality through a warrior-struggle against the Demiurge and the Servants of Darkness. The secret is contained in the Sacred Blood. The work is also about the Last Avatar - 'The Man To Come' - who will be the Manu of the new Cycle of the Ages.

"We are going to present here these keys without an attempt to decipher them, without an explanation, so that only a few of the learned will be able to grasp them, and this, in a time in another sphere, there in an infinite time.

Here, there is already almost no time."

The 'Keys" are given in the Armanen Runes and symbolism that is shown in the pages devoted to these. The work is not just a 'read' but is an esoteric work of a deep spiritual nature, where the Hidden Mysteries are held, and can be found through deep meditation. The key to the struggle is self-sacrifice, to give one's life to this great struggle. Don Miguel left us with the message of the coming Lead Age, an age of indescribable misery and oppression - and age that we have now entered, and one in which he tried to prepare us for. 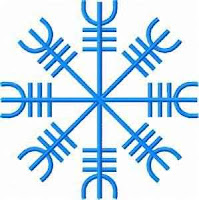