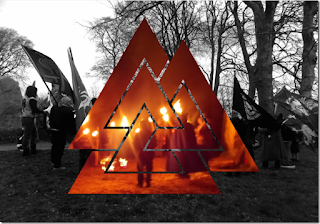 Weland the Smith, or using the more common name, Wayland the Smith, is well known to us through Wayland's Smithy in Oxfordshire, a place that we used once a year for our Ancestral Rites and other rituals, but one which the authorities have now tried to stop us using. To be fair we have not stopped going there due to their trying to sop us from doing so but because of the situation that has prevailed in this ailing land since 2020. The idea was to give it time to settle down and then continue our work there, but this is not easily done at this time, and will not be for a while since other problems are now being thrown at us - the 'fuel crisis' at this time. But I wm not going to go on about this since it is Weland the Smith that I wish to look at here.

Using a site www.atlanticreligion.com I found a very interesting piece of information that is useful to us in our studies; this site suggests that Weland the Smith was known in Ireland and the Isle of Man by this name. Of course, the evidence for this is not certain, but their arguments do make sense. It is about a 'Smith King' who is named Cuillean or Guillean, the pronunciation of which I cannot give, but certainly the Celtic Gu gave rise to the later W so these two could be Willean, which is the argument given for equating this with 'Weland', which is also spelled 'Wieland'.

Aine/Aighne was the sister of Milucriadh of Sliabh Guillean, better known amongst the peasantry as the Cailleach Biorar ('Old Woman of the Waters') of Loch Dagruadh, daughter of Chilean/Guillean. Guillean once dwelt in the Isle of Man at the time of Concubar Mac Nessa, afterwards King of Ulster. Concubar consulted the Oracle of Clochar and was told to go to the Isle of Man to get Guillean, a worker of iron to make a sword, spear and shield for him; the buadha (supernatural power) in these weapons would gain him the sovereignty of Ulster. This is his story.

'Cuillean' or 'Guillean' was often pronounced 'Whallin' or 'Wellin', as found in the Isle of Man where certain place-names are associated with him. It seems that there is indeed a possibility that Weland the Smith was known in both Ulster and on the Isle of Man. We have to remember that it is not the spelling that matters, it is the sound of a word. Our own term 'Wayland' is pronounced like a Geordie would say it.

There is one point that crops up in the article and that is an important one we seem to overlook when looking at the 'Axe-God' and the 'Hammer-God' (Thunor). It is a fact that the axe is the tool of a woodsman and builder of wooden houses, whilst the hammer is the tool of the stonemason or the metalworker (blacksmith). These two tools have totally different roles in a society. Weland the Smith is a metalworker or smith - a swordsmith, goldsmith and jewel-smith as is shown in his myth where he crafts the sculls of the sons of Nidhad using jewels. He is said to shoe horses so he is also the blacksmith. There is a Proto-Germanic Root *welan- meaning 'to work with a craft', but there are other meanings to the root of his name *wel-.

One of the many meanings of the IE Root *wel- is 'to see' which suggests a 'seer' or 'prophet'. This in itself is quite interesting because the son of Weland is named Witege which has variations in 'Witiga' and 'Vidga'; the Old English witega means a 'seer' or 'prophet'. In Germany Witege is linked to a figure called Heime, and here in England Wudga is linked to Hama, both of whom were said to be 'outlaws'. Heime is the Old Norse Heimir, although some see links to Heimdall in this name.

There is an area in East Sussex near to Burwash which Rudyard Kipling connected to Weland the Smith; he associated 'Willingford Bridge' with 'Weland's Ford', but whether this is right or not I do not know. There is another area not so far away called 'Willingdon', another name that may be a corruption of 'Weland'. Kipling mentioned this in Puck of Pook's Hill. Kipling has Weland carving 'Runes of Prophecy' on the blade of a sword he was making.