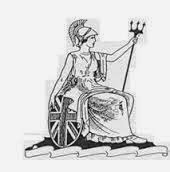 The above drawing shows the figure of 'Britannia', who is depicted as holding a Trident, a Shield (bearing the Union Flag) and with a war-helmet. She is usually shown on the waves of the sea which suggests the idea of 'Britannia Rules the Waves' - clearly this image being adopted as that of the British Empire. Clearly not an English symbol - or is it?
In 1066 a Norwegian army set out to invade England under their King, Harold Hardrada, and one of his warriors, just before he departed for England, had a very strange dream. He dreamt of a great witch-wife standing on the Island of England, with a fork in one hand and a trough in the other. He interpreted this as a sign that the Norwegian army would be defeated (which it was, at Stamford Bridge, by King Harold) as the witch-wife would use the fork to rake up the dead bodies and fill the trough with blood.
Another Norwegian Warrior had a dream of a huge witch-wife riding on a wolf in front of the English army. The wolf carried the body of a man in its mouth from which blood was dripping. As the wolf ate one body, the witch-wife threw it another to eat.
Now, let us look carefully at the first image which has the following symbolism -
1. A witch-wife which is a Christian interpretation.
2. She stands upon the Island of England.
3. She holds a fork.
4. She also holds a trough which collects the blood in battle.
This image is that of the Guardian Goddess of England who is shown holding a 'fork' (trident) and a 'shield' (trough) and - as the Protector of England - she stands over the land. This is none other than 'Britannia' in a much earlier guise; the original shield may well have shown the English Cross.

In the above we see 'St. Cuthman' (Sceaf-Ing) pushing his 'mother' in a wagon; she is seen holding a forked stick like a 'pitchfork'. This scene shows Ing following his 'waen' (Great Bear), driving his 'mother'.
Now we must move to the dream of the other Norwegian Warrior, where we find the following symbolism which we need to analyse -
1. Another witch-wife is seen, this time riding a wolf in front of the English army.
2. She devours the dead of the enemy.
This symbolism is totally different, especially in one very important way, for this witch-wife does not stand upon the land, but leads the English army. This figure is that of the Guardian-Goddess of the English - not the land of England as Britannia is. She is a Wolf-Goddess and a battle-goddess, and is clearly the goddess Freya or Idunn but in her darker aspect. Many years ago, whilst sleeping in a caravan on the Sussex Coast, I had a vivid dream of a goddess-figure who was associated with the Cat - which is well documented as the goddess Freya. This dream happened on the Summer Sunstead, which is the turn of the year from the Light-to-Darkness. It is thus very significant that this Cat-Goddess (seen as a huge figure in the skies) turned into a Wolf-Goddess who was more blood-thirsty and a darker type of figure. This fits entirely with the dream of the second warrior.
So here we have the figure of the Guardian-Goddess of England seen as a warrior-goddess bearing a trident and a shield - the Protector of the Land of Ing. We also have the figure of the Guardian-Goddess of the English who appears here as the Wolf-Goddess who protects the warriors in battle and indeed, leads the English Warriors into battle. Idunn is associated with the Wolf since she sleeps under a White Wolf Skin ('Odin's Raven Galdor'). In the Norse Myth called 'Odin's raven Galdor' both Idunn and Nanna are the same figures.
Freya is the battle-goddess who has first choice of the warriors fallen in battle, taking them to Folkvang; she is also the same goddess as Frigg, and thus the wife/mistress of Woden (Od). Woden is the Wolf-God and she is the Wolf-Goddess in her darker aspect. She is Idunn who guards the Golden Apples of Immortality and is thus associated with rebirth and regeneration.
Here we have two of the most important images useful in our struggle for English Freedom, for these archetypes need to be awoken once more to protect the Land of England and the English Folk. The White Dragon is not just a flag, nor just a banner, nor even just a symbol of the English - it is a symbol of England, the land, and its Folk. Awaken the image of the White Dragon and the Land of Ing will awake - awaken the White Dragon and the English Folk will awake! This is the true importance of the symbol of the White Dragon, and here we have two more important archetypal symbols to awake!

The Winged Coiled Serpent of Germania!