There is yet some sanity in this insane and dying world. The Dalai Lama has stated at a conference in Malmo, Sweden -

The Dalai Lama is one of the highest Spiritual Leaders in this world, far removed from the Judaeo-Christian 'archbishops', 'bishops' and the rest of the so-called 'spiritual leaders' of this country. He stated that there is a responsibility to help 'refugees' (some of whom are certainly not so) but that they should eventually go back to their native countries to rebuild them. He made similar comments concerning refugees in Germany in 2016 where he said -

This was related by the Daily Mail Online on September 12th 2018, and is a flash of light in an ocean of darkness and insanity. 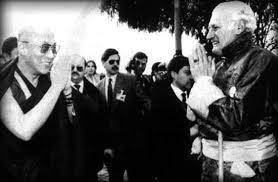 As a High Spiritual Leader the Dalai Lama is in a far better position to know what is right and what is wrong than the gross materialists who lead Europe and the world today. He sees the Spiritual Truth which is beyond and above the physical world but forms the basis of the workings of truth in this world. He is an exile from his own lands, occupied by the Chinese, but no doubt wishes to return and to aid his own people some day.

Buddhism, on the surface, is a purely pacifistic spiritual discipline, but there are hints of a far deeper side to it. It is quite well known that there were many ancient books hidden in the monasteries of Tibet, hence why so many Western Occultists went there, and why the Germans made so many expeditions to this land and in fact came back with hundreds of works whose teachings were incorporated into their own Weltanshauung.

The Dalai Lama teaches the first seven initiations of the Kalachakra Tantra, meaning 'Wheel of Time' or 'Wheel of Destruction'. I am not conversant with these teachings but it has been said that this sees Judaism, Christianity and Islam as the opponents of Buddhism. There are also veiled teachings about those undertaking the Kalachakra Tantra being reborn as Shambhala Warriors, Shambhala being seen by some occultists as the ancient home of the Aryan Race, although there were said to be two places of such name, one physical and one a spiritual realm.

There does seem to be an underlying 'force' moving hidden below the surface of world events that is today manifesting as a counter-movement to the Global Dark Empire. In simple terms there are five distinct 'arms' to this global 'Dark Empire' -

This is an oversimplification but it will suffice to show that this is a world 'conspiracy' through both politics and religion to take control of the world, to destroy all nations and borders, and thus all peoples of the world. We could mention Masonry too which forms a large part of this, and also the various secret societies working within the System to control the masses.

We oppose Capitalism because it is based upon materialistic economic consumerism, and the workings of this system are based upon usury, the loaning of money with interest, i.e. making money out of money rather than the earning of wealth through hard work.

We are opposed to Marxist Socialism/Communism because it is the 'Revolt of the Slaves' and serves the purpose of destroying the Germanic Aristocracy of the European Nations and little else. It places the lowest in the highest positions which is a reversal of the Natural Order.

We oppose Judaism-Zionism, Christianity and Islam because they are all religions that 'convert' through violence, terrorism, and murder (this can be clearly seen in the Judaic Old Testament, from the history of Christianity, and is clear from modern Islamic teachings) and are alien religions to the peoples of Europe. Zionism is a more materialistic form of Judaism which teaches world domination as much as Christianity did, and Islam does today. 'World Domination' means a World Government, and from the teachings of these religions, and from the past record of Capitalism and Communism these are certainly not going to rule as benevolent leaders or be there to serve the will of the peoples of our Nations. 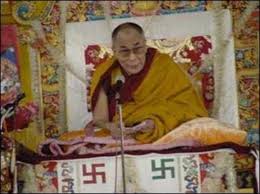 Buddhism followed on from the ancient Heathen Religion of Tibet - Bon - whose prime symbol was the Fylfot-Swastika, as shown here having been incorporated into the later Buddhism. Bon was a 'Warrior Religion' for the 'Warrior-Race' of the Tibetans, since they were once a more warlike people. The Kalachakra Tantra forms part of the Vajrayana part of Buddhism, the term vajra meanings 'thunderbolt' or 'lightning-bolt'. 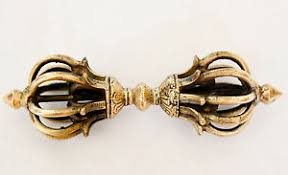 The above is the vajra which is used in Tibet, but there is another form which makes it clearer what this symbol really is - 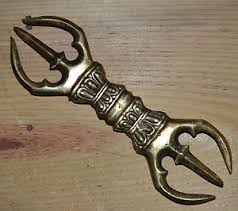 This form is clearly a double-ended 'trident' and is the 'Trident of Shiva', a symbol also shown in the hands of Odin in an old image by Snorri Sturlason. This indeed is the 'Thunderbolt' or the 'Lightning-Bolt' and is a very ancient symbol.


As the highest Spiritual Leader of a spiritual discipline that goes way back into the mists of time (Buddhism followed from Bon) the Dalai Lama sees the world in a far different way from the materialism of the West. He is thus in a far better position to see what is right and good for a people, and what is wrong and bad (destructive), and he is not afraid to speak his mind on the subject. He has not been corrupted by the Judaeo-Christianity that Europe has endured for over a thousand years.