The Long Man & The Yew Tree

The area now known as Wilmington was, at the time of the Doomsday Book (1086) written as Wineltone or Wilminte. The village itself has some interesting house-names, for instance - 'Hunter's Dene', 'The Chantry', 'Sanctuary', and 'Fairleigh' the latter suggesting a link to the ancient Ley-Lines. It is also interesting to note that the church in the village is named St.Mary and St. Peter, the latter being the Guardian of the Gates of Heaven which links to the idea that the Long Man is the Guardian to the Gateway to the Gods. The church itself is built upon a hillock, suggesting that it was built upon an earlier heathen site, the Yew Tree being there before the church was built. It is also to be noted that the name 'Peter' stems from Petros which means 'rock' or stone'. In the Egyptian Book of the Dead there is a guardian of the realms of the dead known as Petra. There are links here with the Roman God Janus who opens a new year, January being named after him. Janus is also a ferryman and a key-holder, just as Peter is holder of the Keys to the Gates of Heaven.

The Yew Tree is said to be anywhere between 1000 and 2000 years old, suggesting that no one really knows its age, though the usual age is said to be 1600 years old, around the 5th Century CE, which would take us into Saxon times. The tree is obviously very, very old since it has had to be shorn up with old telegraph poles.

In the nineteenth century it was said that from time to time a cockerel could be seen to the west of the hill-figure, near to the top of one of his staves. The cockerel, cock, or rooster has the symbolism of the Rising Sun and a New Dawn, but in different cultures it has varied symbolism -

One legend states that the Long Man was made before the flood, thus linking it to a time prior to the last coming of the Hale-Bopp Comet. In 1995 (two years before the comet appeared) a crop-formation known as 'Yin-Yang' appeared beneath the hill-figure. In fact this may look similar to the Chinese 'Yin-Yang' but it looked even more like our own Jera-Rune in its CGF variation, hence symbolic of Cyclic Time.

Old legends tell of a time when Giants ruled these lands, one giving his name to them - Albion. Albion was said to be the son of Neptune, which may well be of interest to us if we see Neptune as Njord of Norse Mythology. The son of Njord would be Ingvi-Frey or Ingwe as the English named the 'hero'. Albion could be compared to the Sleeping-Hero under the mountain (hill) awaiting his time to awaken once more to save these lands.

In legend Albion is overcome by Brutus the Trojan, and we do know that AEneas flew Troy after its defeat and after many great adventures reached Latium, where his descendants founded Rome. We do know that the Trojans, whilst in Latium, called themselves Albans, and an alternative title of the Picts seems to be the Alban of the Yellow Hair, suggesting a Nordic origin. This does not fit well with the 'little people' idea but we have to remember that in much later times everything has been distorted beyond recognition. Snorri Sturlasson equates AEneas with Wid-Ar; the descendants of AEneas were Romulus and Remus. 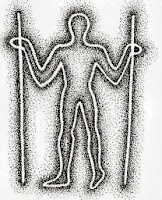 The White Horse on the nearby hill known as High & Over or Hindover also suggests a link to the Sleeping-Hero or the Last Avatar. Like the Long Man, above this hill-figure is a round-barrow, and the hill is very much like the one where the Long Man lies, though it overlooks the winding River Cuckmere in the Cuckmere Valley. This, of course, is said to be a late figure, but we do not know for sure that there was not one there earlier - the Long Man has been changed from its original form.

We are piecing together the true meaning of the Long Man of Wilmington, though this will take a very long time. There are no doubt more secrets that will be revealed over time.