The Hammer of Thunor 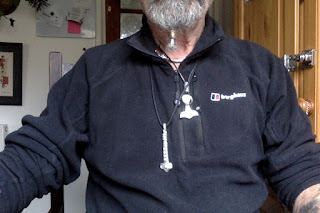 In the above photo I am wearing a Thor's Hammer, to the right of which is a 'Thunor's Hammer' which I have just bought from Scyld at WyrdArt (*). History and archaeology tells us that the Vikings and Norsemen first brought the Thor's Hammer over to these islands - history and archaeologists are wrong! This Thunor's Hammer was found in a sixth century grave in Kent, this being the time when the Anglo-Saxons were still heathens, and obviously worshipped Thunor the Thunder-God.

Osgar first mentioned that this Thunor's Hammer has been held in a Liverpool Museum for some years, marked as an 'amulet', even though it is clearly a Thor's Hammer. Osgar has been doing a great deal of research on this to bring this into the light, and Scyld has taken this up by getting these pewter amulets (around 3") out to our Folk.

Once again our true history is coming to light, breaking through the lies and distortions that have succeeded in distorting our true English Identity. English Wodenists can now wear the Thunor's Hammer in pride, beside the Thor's Hammer of the Vikings.

(*) You can get the amulet from Scyld at WyrdArt and thus help to promote this symbol next to the Thor's Hammer. Invariably, the Anglo-Saxon period of our history is pushed to the back, and it needs to be brought to to the fore again now.