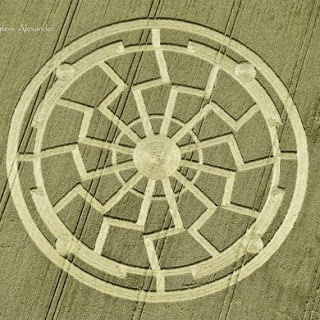 This is the famous Black Sun Crop Circle that appeared at Ox Drove, Bowerchalke, Wiltshire in England; it appeared on 8th August 2105 (8 - 8 - 8) which is a most significant dating. I have featured this in a previous post in 2015 so there is no need to do anything but fill in a few gaps here. I am going to look at certain points again, and it would be wise to look up the original post to gain further insight into what is being said.

1. The four 'dots' make up a square, so we have the 'square' within a 'circle' or 'Circle-Squared'. The 'square' is the Earth and the 'circle' is the Cosmos - Earth and Cosmos as 'One' creating the Haeldom.

2. The 'refracted' rays, 4 in number, that go through the second circle may well do so because the outer circle is symbolic of water. The symbolism seems to be that of Thule-Hyperborea and At-al-land with its three concentric 'rings' or 'islands'.

3. I am no scientist and I do not profess to know anything much of science, but this whole thing looks somewhat like a machine of some kind that revolves within a sphere of water. Now, Viktor Schauberger used a vortex-movement of water in his experiments based upon the Aryan Science of Implosion. The 'dots' could also be some form of 'wheels' which move within the outer ring, presumably in an anti-clockwise direction. (*)

4. I mentioned in the original post that if you focus and un-focus the eyes whilst looking at this the spaces 'in-between' come into life; this creates a form of inwards-moving spiral. Now, the 'spaces-in-between' are an important concept because we tend to always look at an object such as a tree whilst missing what can be seen as the spaces in-between the object itself. These spaces are just that - space; they are equivalent to The Void, the Dark Matter in-between, and the Black Sun. This 'no-thing-ness' is at the root of the modern concept of Zero-Point Energy in Quantum Science (as I understand it). 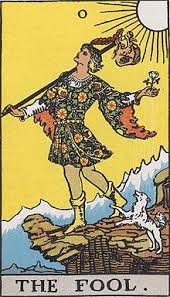 Here 'The Fool' - numbered "0" - is looking upwards at the object (the sky) whilst missing what is below - the Gaping Chasm, the Void, or Ginnungagap which is right before him. He is missing a vital part of his consciousness.

5. The inwards-moving spiral movement towards the centre is the Aryan Science of Implosion. This is connected to the Science of The Void and that of Zero Point Energy. This is the symbol of the Black Sun itself, which has often been seen as symbolic of The Void. This is not 'Dark Matter' or 'Dark Energy' but is the Ur-Source of this energy which pervades the multiverse. The Black Sun is indeed the 'Void of Creation' out of which all life springs.

6. The process involved here is that of the Black Hole which continuously sucks in everything around it - sucks in matter. However, for some unknown reason this also has bursts in which energy is thrown outwards again, which suggests in itself an energy source of great power. There is a Black Hole at the centre of our Milky Way Galaxy.

7. There are three sections to each Sig-Rune; there are twelve Sig-Runes; these make 36 which is part of the sequence 36 - 72 - 144 which seems to relate to the Precession of the Equinoxes. There is a mention of 144,000 in Revelation which some relate to a form of vibrational current at a spiritual level.

8. The 4 rays extended on the 4 Sig-Runes when refracted through water could represent these passing through the 'Waters of Chaos' or event the 'Waters of Time'. These touch the circle which represents 'Spirit' which must be significant. The image of 'water' may also suggest the concept of 'Fire from Water' which became a topic of argument over the concept of 'Cold Fusion' which defies the laws of modern science. This seems to have been from an experiment which used a spiral motion around a centre.

9. The 'extensions' on each of the four arms of the three Fylfot-Swastikas that can be seen in this are also found on the roof of the 'Valhalla Crypt' of the Wewelsburg Order Castle in Germany.

What are we to make of these Crop-Circles? I have shown how I have actually seen a similar circle in long grass produced by a 'Vortex-Wind' when on the mountains of Snowdonia in North Wales. This 'Vortex-Wind' was intelligent and had consciousness - which I could feel. There are also similar crop-circles that seem to be made by some form of Balls of Light, which have been photographed as they happen - or it would seem. Many of these seem to have been 'Mayan' and when we consider that up to 2012 the Mayan Prophecies were focussed on by a good proportion of mankind this could represent some form of unconscious production.

The link to 'extraterrestrials' or 'aliens' is something that crops up throughout investigation and I feel that this should be focussed upon if we are to understand what is happening. There seem to be two sets of 'aliens' involved in the process -

The Grey Aliens - These appear to be involved in a way that seems to be stemming the evolutionary process of Man. The fact they appear as 'grey', soulless and even hint at the soulless multi-cultural society where there are no races, no sexes and no genius - just a 'grey' mass of neither Black nor White, infused into a soulless mass of slaves. We would see these as the 'Joten'.

The Nordics - These appear to step in to aid mankind; they often make experiments on the genes and on trying to recreate. They appear to be helping Man towards a Higher Evolution and a Higher Consciousness. They appear as Aryans - or so we are led to believe by those who have experienced this. We would see these as the 'God's and the 'Elves'.

The way that the so-called UFOs act is not in keeping with scientific knowledge and these seem to defy our Laws of Science. This makes it probable they are not 'extra-terrestrial' but 'extra-dimensional' - coming from another world, or maybe the Inner Earth. Their science is the Aryan Science of Implosion and the Black Sun is the source of energy for this Inner Earth which is parallel to our own. This is the basis of Lord Lytton's The Coming Race which connects this power to the Vril-Force.

A second and earlier crop-circle also had what appears to be a version of the Black Sun as its basis. This clearly had 12 Sig-Runes in the form of the inward-pointing 'Lightning-Flash', also making a 12-spoked wheel at the centre. Each one is quite different than the other, not obvious at first. The 'white' pieces are all of a differing length, making each Sig-Rune different in form. In this one, though, the Sig-Runes are the normal way and are not reversed. Clearly the 12 Lightning-Bolts are pointing inwards suggesting again the Aryan Science of Implosion.

This may also suggest to us Zero Point Energy since it appears to have a 'dot' at the centre (The Point) and a circle around the outside (Zero - O). The central 'wheel' has 12 spokes and thus could represent the 12 sections of the year, the zodiac and of the Precession of the Equinoxes.

(*) Viktor Schauberger mentions in at least one of his papers that he was involved with the German Science of 'Flying Saucers'. We know that he was taken to the USA where no doubt his work was used, and we know that he died a 'broken man' through this.

Editor's Note: Predictably, the website 'Crop Circle Connector' has this symbol as a 'Celtic Sun-Wheel' and states that it is not the 'Black Sun' in an attempt to discredit it. Clearly this one does not fit into the 'norm' of even the 'alternative'  culture in this country. Why does everything in this country have to be 'Celtic' - this again proves that this is a tool of disinformation designed to hide our true Germanic Ancestry. Another site tried to dismiss this by making it into an 'anti' sign, despite the clear fact it appeared on August 8th 2015, giving the numerology 8 - 8 - 8.