The Thule Mysteries centre around the 'Midnight Mountain' which is to be found at the Far North. This is a Mythical Mountain, the White Mountain, which lies on the White Island in the North. This Holy Mountain we call Mount Me-Ru or Mount Su-Me-Ru -

Su = The Sun, The Light, The Source, The Generator.

The Runic-Ladder (the human spinal column) leads upwards through the 33-Runes of the Ar-Kan Runes, upwards along Su-Me-Ru. This is the Path of the Serpent or Path of the Fire-Serpent.

This mountain has been known by various names in different traditions -

Interestingly, another area where the Aryans settled after the sinking of Atlantis was around the area of Tibet. In Tibet this Sacred Mountain is known as Olmolungring which was also known as Ong, Og or Oz. It was supposed to be an invisible kingdom located in a north-west region of Tibet, which, of course, is the material and physical location given to it later. This is the area where Shenrab descended on a rope.

Shenrab is the founder of the ancient Bon Religion of Tibet which existed prior to the coming of Buddhism. He descended from 'heaven' on a rope some 18,000 years ago, we are told. He taught in the region of Mount Kailas (The Swastika Mountain) and his alternative name was Mura. He was the original teacher of the Kalachakra Tantra which means 'Wheel of Time'. 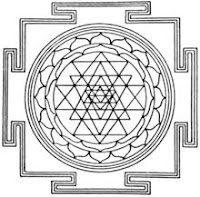 The above mandala - Shi Yantra is based upon upwards and downwards triangles. But if this is meditated upon and the eyes focussed and unfocussed a vortex-shape appears at the centre. This is somewhat like an 'hour-glass' suggesting 'time'. The Holy Mountain is often seen as shaped like this; the shape can be found in our Daeg-Rune. There are 16 petals around the outside (8 + 8) and 8 petals on the ring inside this.

The Great Bear - Little Bear formation in the North was called Tula in Vedic India, a name meaning 'The Scales'. One of the sons of Genghis Khan was named Tula or Tulee whose son was Kublai Khan. One of the steps Genghis Khan took was to take control of the area of the Shensi Pyramids in China, a step that he must have felt of great importance. The pyramid, invariably, symbolises the Midnight Mountain. Genghis Khan took the name of Hor for his people, and this was later developed into the Uighurs, the original race of Central Asia. It is also strange that the Egyptian Shemsu Hor ('Followers of Horus') were supposedly a 'Master Race' of ancient times.

The Thule Mysteries are extremely important to us because of their great age and because this era was when the Solar Race ruled the world and when the world was in harmony and balance. We see importance in the time of the Saxons and Vikings, of course, but these are late eras in the Dark Age, and to understand the true nature of our Folk we need to understand the era of the Solar Race or Arya. This is why we tend to go back to the Mysteries of Thule and of At-al-land over and over again. We can see from the foundations of the USA how certain key towns and cities in the 'New World' were called after their original names here in England. It is thus feasible to assume that the name 'At-al-land' could be a title and that the name 'Thule' could also have been given to this land after being transferred from the original Hyperborea - the Ur-Hyperborea.