The fact that there is so much evidence to prove the existence of lost civilisations in the ancient world cannot be denied. More and more research is finding evidence to prove this. But, as usual, there is always a stumbling-block placed in the way of this research, and that today lies in the approach that attributes these lost civilisations to 'aliens'. This infers that the human race were, as established history tells us, primitive savages that needed help from 'aliens' to build such civilisations.

Our research has always come up with the fact that mankind has not evolved upwards from the apes but has devolved from a High Race of the North to what is left of that today within the White Race. And that the process by which this 'fall' started was the mixing of the High Race with lower races which meant the loss of the Higher Consciousness that built such vast and ancient civilisations. This, and the gradual downturn of the Cycle of the Ages to what today we know as the darkest point of the Dark Age.

Through the ancient legends of the peoples of Central and South America we find the common theme of a 'White God', a tall, bearded, pale-skinned and blue-eyed figure who appears in a time of chaos to help the native peoples and leaves a high degree of knowledge behind him. This figure appears in various cultures as -

Huaracocha - Another alternative name for the same figure.

These figures come as 'civilisers' of the primitive peoples, but unlike their later counterparts - the Christians - they came to help these peoples in a time of disorder, chaos and catastrophe. These were all described as being tall, white, bearded and some with blue eyes - obvious references to people of the White Race. There is also a rather important, and obviously overlooked or ignored, statement about the science of these 'White Gods' -

...they saw that the fire was extinguished at his command, though stones were consumed by fire in such wise that large blocks could be lifted by hand as if they were cork.'

These 'White Gods' obviously had a science unknown to us today, a science where stones could be lifted and moved by somehow defying the Laws of Gravity. These people also worked with a kind of 'magic' and were healers too; they were, in the main, respected by the natives who welcomed them - though this was not always the case. The quote above is part of a piece recording an uprising against Viracocha who used Fiery Magic' to quell the natives. But in the main these 'White Gods' went around peacefully helping the natives and giving them knowledge - knowledge in many cases that was left for them to record and pass on until a time would come when we ourselves - the White Race - would need to find this knowledge again.

It is said that Viracocha was helped by 'messengers' known as hayhuaypanti - 'Shining Ones'. The Inca road system was said, in local tradition, to have been 'ancient in the time of the Incas' and were 'the work of white auburn-haired men' who had lived thousands of years earlier. The word 'Inca', we know from Spanish writers, was originally spelled 'Inga' which is interesting; they occupied the area around Peru. The 'Viracochas' or 'Shining Ones' were said to have been the builders of many ancient monuments in this area.

Father Jose de Acosta's Natural and Moral History of the Indies states that Viracocha came out of Lake Titicaca and stayed in Tiahuanaco , thence going to Cuzco which is the 'Navel of the World'. He came after a 'Great Flood' which occurred in that area of the world. 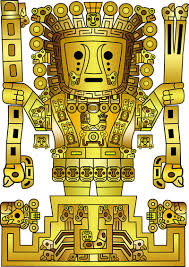 Viracocha here stands in the same position as the Long Man of Wilmington and the Atacama Giant. He holds Twin Serpents rather than 'staffs' or 'spears' and he is a Solar God. It should be noticed that he does hold Twin Serpents, but like the Swedish bracteate showing Woden in this same stance the serpents (like the horns) have heads of birds. 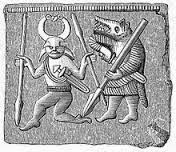 Legends state that Thunapa created a peaceful kingdom and taught to the natives the arts of civilisation; he was struck down and grievously wounded by a group of natives and his body placed in a boat set adrift on Lake Titicaca. Although at this time these 'White Gods' came in peace to help it seems that on some occasions their help was rewarded by being slain.

In Central America the figures of Quetzalcoatl and Kukulkan dominate - both again are 'White Gods', tall, bearded and blue-eyed. Going back to the staffs of Viracocha, bird's head on the serpents, Quetzalcoatl means 'Feathered Serpent' and Kukulkan was described the same. Quetzalcoatl was described as bearded and wearing a long cloak. We cannot but compare the name 'Kukulkan' with the Irish 'Cuchulain' - the 'Hound of Ulster'. These figures came from the 'East' across the 'pond' and when Quetzalcoatl left he did so in a boat with serpents - all of these were linked to the Serpent.

The Mayan texts known as the Books of Chilam Balam says that the first peoples of the Yucatan were the People of the Serpent. Their leader was Itzamana who was the Serpent of the East, a figure who could heal and raise the dead (heard that somewhere before). Quetzalcoatl forebade the blood-sacrifice of the Aztecs, which was only revived again after he left. It is interesting to note how the reign of Quetzalcoatl ended - it ended with the eternal cosmic struggle of the Forces of Light and Darkness. It was brought to an end by Tezcatilpoca, a fierce and malevolent god whose name means 'Smoking Mirror' and who demanded blood-sacrifices. It was at Tula or Tollan that Quetzalcoatl was forced to quit Mexico.

Quetzalcoatl promised to return to the Americas and to overthrow the Cult of Tezcatipolca and revive an era of the Gods where the thirst for human blood would be ceased and peace and harmony returned. We can see in this single figure the archetype of a tall, fair-skinned, fair-haired white man bringing culture and civilisation after a Great Flood. This appears in many other legends from across the world. Coming to Central and South America from the East we may suggest a link to the sinking of At-al-land; maybe at the latter part of the catastrophes that sank these ancient lands. We do not know this, but there may be a link because all over these islands here there are legends of ancient Serpent-Cults. Again, whether these were a Cult of Light or Cult of Darkness we do not know, but certainly in the Americas these came as a Cult of Light.