"The Light comes not from the East but from the North. Its tradition is Uranian, being derived from Uranus, Lord of the Cosmic World Order, and of the primordial paradise of the Aryan Race situated at the North Pole.

It was Uranus' usurping son, Saturn, who brought upon this happy and unified humanity the dubious gift of the egoic state. The temptations consequent on this change in the human constitution lead to the loss of the primeval unity and eventually the destruction of Saturn's realm, Atlantis."

The basis of Julius Evola's ideas rest upon the Solar Way also being called Uranian; this he sees as being linked to Being which he sees as superior to Becoming. My view is that Being and Becoming are both two sides of a coin, both necessary since Becoming itself suggests change. It seems that when Being is imposed upon Becoming we see quick change and indeed a shift to a higher dimension and a higher civilisation. But what interests us here is the Uranian concept.

The son of Uranus is Cronus, Saturn being the Roman term and not Greek; that is a minor point but for accuracy needs stating perhaps. Also, it is usual to see Lucifer as the god who brought to mankind the ego, and I am not sure here where Saturn comes in, although this could derive from a link between Saturn and Satan. Lucifer, it has long been established is not the same as 'Satan'. The 'ruler of Atlantis' was Poseidon who, interestingly, Jurgen Spanuth equates with Forseti (*). Saturn, though, it is said, was ruler over the Golden Age if that can be equated with Atlantis. 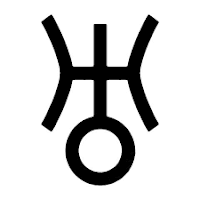 The above shows the astrological sign used for Uranus; the 'H' stands for the name of the 'discoverer' of the planet - Herschel. Below we see the planetary sign of Uranus which gives us far more of a clue as to its essence - 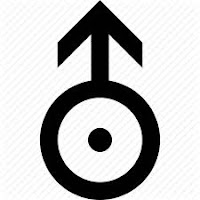 The symbol has two distinct elements -

The symbolism bears a Solar and Martial aspect; it is obviously very masculine and virile. It is interesting to note that Uranus rules over the Age of Aquarius, which many see as coming into being, though there are today new and revolutionary ideas on this and some now feel we have been in the Age of Aquarius for some centuries. However, the rulership by Uranus is a modern view and the traditional view has Saturn ruling Aquarius.

I feel here that it is best to look at Saturn in regard to the rulership of the New Age. Saturn is always seen as a malevolent planet, and it is a fact that all three of the major religions - Judaism, Christianity and Islam - seem to hold to Saturn worship rather than the Solar Way of the Solar Race (**). Miguel Serrano has it that Saturn was 'chained' and 'enslaved' by the Demiurge and that he will, in some way. be freed from this bondage. The 'Chained Giant' is very much part of various mythologies. Saturn is the 'Lord of the Rings' and the Rings of Saturn may play some part in this idea of being 'bound' - bound by the Rings of Ice.

Some have associated Saturn with Loki the Trickster; it is true that the moons of Saturn have many Norse 'Giant' names, including Surt (which may or may not be important). Loki is also seen as a 'Bound Giant', as is Cronus-Saturn, so perhaps we should look at this further. Loki does not start out as an evil being, indeed for some good reason he became the blood-brother of Woden - we do not know why. But he gradually becomes more and more evil until he is responsible for slaying the Sun-God, Baeldaeg, and then leading the Joten against the Gods. Perhaps in this we can see Saturn as once being a benevolent planet and then, for some reason, changing into the opposite. This would explain his rule over the Golden Age and then his role in later times.

Uranus is the sky-god, whom we could call the Sky-Father; he is said to be the son and husband of Gaia, the Mother Earth. She either gives birth to him without male intervention, or his father is said to be AEther - the aether? Gaia and Uranus are the polarities that come out of Chaos - the Void. This also gives us a clue since these being opposites would produce a third - Saturn. The idea that Saturn 'castrated' his father merely means that he lost the ability to regenerate and reproduce - his reign was over. The Sky-Father in Germanic Lore is Tiw whose name means 'shining' and who is thus related to the Sun.

The Vedic equivalent to Uranus would appear to be Varuna; he is the Ruler of the Worlds, the ordainer and enforcer of law, and the upholder of world order. He is said to be the Lord of the Earth and Heaven who sustains the tree that has its roots in the heavens and its branches below. His mother is Aditi and his brother Mitra; with Mitra he controls and upholds the World Order, Rita. He is also said to make the rivers flow and associated with all water-life. He sits in a chariot drawn by seven swans.

It is interesting to note that Varuna (Fa-Runa) and Mitra uphold World Order, since the Mithraism is said to have been created to oppose the growing 'Religion of Evil'. Mitra of Vedic Lore becomes Mithra in Persia and then Mithras in Rome. Mithras is the Bull-Slayer and here we could see the bull as Moloch perhaps. Mithras is a Sun-God and Solar Warrior.

Tiw is the God of World Order and also the Solar-Warrior, a God of War; he gives his name to the Teutons (Teu-tons). We get our Tuesday from his name - Teu. He is also a Tribal God related to the Germanic Teuta and Tuatha. His symbol - the Tiwaz-Rune - shows clearly the balance in the 'arrow-head' or 'spearhead' shape where the arms are balanced. 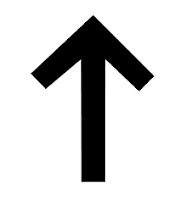 We can see here how the Symbol of Uranus has the same 'arrowhead' as that of Tiwaz - the Symbol of Balance. This symbolism can also be found in the figure of Irmin who holds the balances - this is symbolic of Cosmic Order and the Rita. Now, since it is Tiwaz-Uranus who holds this balance in a state of equilibrium, harmony and perfection we would think that it would be Tiwaz-Uranus who would rule the Golden Age of Perfection.

I would here like to else here which may be important; these 'arrows' appear in a number of the 33-Runes of the new runic set which were revealed in 2012. 11 of these runes have this symbolism within them, either pointing upwards, downwards or in both directions. Since this is a symbolism found in the astrological Sign of Mars then we can assume that it is an Aryan Symbol (Mars = Aries) of some importance. That it appears in a new set of runes suggests something importance too. Indeed, Tiw is one god that is today pushed into the background somewhat.

Tiw and Tor (Thor) are two gods linked closely together in the upholding of World Order, as are Uranus and Mithra. Thunor's role is that of being the counter to the Joten in strength; he is the one who always matches the Joten and holds them back from attacking Asgard. The Joten oppose this World Order and seek always to overthrow it. Their main role is of strength but the wiles of Loki the Joten are also part of their strategy - he is the 'Enemy Within'. Tir  and Tor are similar names, and there has to be a link between the two gods.

Throughout Aryan Mythology we find the mythical struggle between the 'Gods' and the 'Joten', the Devas and the Asuras, Ahura Mazda and the Dews; this is reflected here in Midgard by the struggle between the Arya and the Dasyas. This struggle is between the Forces of Light and Order (Gods, Elves and Arya) and the Forces of Darkness and Chaos (Joten & Dasyus). The Germanic Folk placed great emphasis upon the upholding of Cosmic Order and the Rita, and that the Germanic Folk were there to uphold World Order. The Arya act very much like the White Blood Cells in the human body in that they counter any unbalance within the organism. This role, of course, is within the Mother Earth (Middle Earth), and it is thus important that this role be maintained if the Earth is not to be destroyed.

There is one thing that seems to give us a clue as to the 'Golden Age' and the rulership over this 'Golden Age'. When this ended, we can see from various different sources, the mythical sunken lands were taken into another dimension. From various sources we find that a Hidden Sun or Black Sun illuminates this Lost Land - Hyperborea-Thule. The land of Atlantis was a shift from the Polar to the Solar and from the North to the North-West; this land does not seem to have the same type of legend of being transported into another dimension - maybe because it was far more material and physical than the Ur-Land. The 'Golden Age' would have originally been the Age of Thule; the Age of Atlantis would be a later age, and as we have seen in the last post, an age (it would seem) later ruled over by a false priesthood who ruled over the Aryans. Whatever the case, the Ur-Land (Thule) would have been ruled over by the Hidden Sun which still rules that world that runs parallel to our world.

There is another problem here since Landig's ideas are not necessarily right; there is no way of telling what happened in Atlantis anyway. There is also another version of this which tells of the Aryans being created at the end of Atlantis, and that the ego was introduced in order to counter the problems that caused the destruction of Atlantis - the misuse of the powers and energy of their science. Landig also suggests that Hyperborea and Atlantis existed at the same time, which most scholars do not. It is most likely, and logical, that the remnants of the Aryan Atlanteans were led out of At-al-land by the Manu of the Aryans and settled in an area now called the Gobi Desert. From there, after another catastrophe, they would have moved into Persia and India, and all of the other areas around here that were once populated by the Aryans.

In her Epic of Arya Abir Taha tells how the 'Divine Ram' - Rama - gathered the best of the Aryans in order to embark upon a 'divine mission'. The Race of Light split into two distinct parts - the Ram which retained the Light, and the Bull that fell into Darkness. The followers of the Ram honoured Wisdom, Truth and Harmony, whereas the followers of the Bull, took up the the symbol of materialism and ignorance. The Bull is 'Moloch' and the Ram - Rama - represents the True Arya. It was Manu who led the people at the time of the flood, led them out of Atlantis with the purest of the Arya, the Sons of the Sun. The Ramayana speaks of the Ancient Solar Race.

(*) This is interesting in that we see Poseidon as the God of Atlantis, and we find that Forseti is the God of the Frisians, the Frisians being part of the makeup of At-al-land.

(**) This has been outlined in the latest 'Sword of Wayland' where Saturn-worship and these religions is discussed in detail.